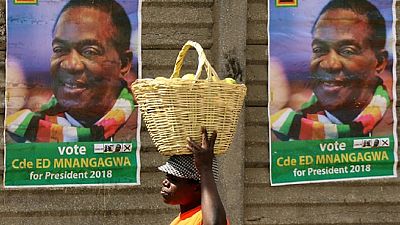 Zimbabweans have largely dismissed the move by president Emmerson Mnangagwa to queue along with ordinary citizens to buy fried chicken over the weekend, with just a little over a month to the election.

State media had sought to highlight the president’s ‘everyday man’ credentials, after he made an unscheduled stop on Sunday at a fast food outlet in the small town of Chegutu, 100 kilometres (62 miles) west of the capital Harare.

“He ordered a two-piecer and a minute maid (juice), paid $3.75 with $20 and told me to keep the change,” said Isabel Mtongerwa, the cashier who served Mnangagwa.

A Mnangagwa on a mission

Mnangagwa is working hard to shed his image as Mugabe’s enforcer, engaging the public on social media platforms like Facebook and Twitter, something Mugabe frowned upon.

Prior to coming to power last November when Mugabe was forced to resign following a de facto military coup, Mnangagwa was secretive and insular, preferring to operate under the radar, and was known by the monicker ‘Ngwena’, a Shona word which means ‘Crocodile’.

Twenty three candidates have registeredto contest the presidential election on July 30 but Mnangagwa and 40-year-old Nelson Chamisa, the leader of the opposition Movement for Democratic Change, are the main contenders.

But on social media, many were not impressed, citing the fact that the president paid for his meal using hard cash yet many citizens have to stand in long tedious queues to get meagre amounts of cash.

Why exactly should Mr Mnangagwa queuing (at Chicken Inn ?) be news?

It only gets to be news when he gets to a bank queue at 03:00 to stand a chance of getting a $50 withdrawal in 10c coins at midday.

Or when he gets admitted to Parirenyatwa Hospital for treatment#ElectionsZW

A tale of two stories.
Picture 1 – Zanu PF leader Emmerson Mnangagwa grabs a bite from a local fast food outlet where he spent less than $5 and gave the change to the attendant

Zimbabwe abandoned its own hyperinflation-hit currency in 2009 in favour of the U.S. dollar, but a widening trade deficit, lack of foreign investment and a decline in remittances by Zimbabweans abroad have helped to fuel foreign currency shortages.