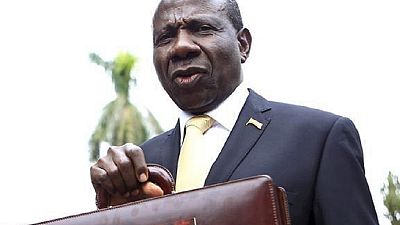 Uganda’s finance minister told journalists on Monday that a new tax on mobile money transactions in the country that was approved by parliament last week, is different from what cabinet agreed.

Last week, legislators passed the Excise Duty Amendment Bill, which introduced a one per cent tax and varying taxes on other electronic transactions such as airtime and social media networks like Twitter, Facebook and WhatsApp.

Matia Kasaija, who was not in the country when parliament passed the Excise Duty Amendment Bill 2018 on Thursday, explained that cabinet and the ruling party decision making body had agreed on a 0.5% levy, and not 1% which was passed by parliament.

What we agreed on was a half of one per cent. I will ask the responsible officer how 1 per cent tax on Mobile Money was approved.

“I apologise for that because it contradicts what we agreed on in Cabinet. What we agreed on was a half of one per cent. I will ask the responsible officer how 1 per cent tax on Mobile Money was approved,” Kasaija said.

Critics of the tax have argued that it will hurt low income earners and Ugandans in rural areas that are not adequately served by mainstream banks. Uganda has over 23 million mobile phone subscribers who transact using the mobile money system to effect money transfers, utility bill payments and lately even borrow money.

Tax discrepancies to be discussed

Kasaija pledged to discuss the tax discrepancies with the president ahead of the budget reading next week.

“I am sorry I was out of the country. I will have a discussion with the President and may be by the time I read the budget next week, a solution will have been found,” Kasaija said.

The finance minister added that the Shs32.7 trillion ($8.6 billion) budget that will be presented next week will focus on key growth sectors of agriculture, tourism, ICT and infrastructure development.

The government is looking to modernise these sectors to lower the cost of doing business and spur industrialisation.

The new taxes are part of measures to raise the country’s tax ratio to GDP by 0.5 per cent annually but critics including civil society organisations have condemned the specific taxes on mobile money and social media.

“The nation is still in shock about the 1 per cent tax on Mobile Money transactions that yield Shs115 billion yet we proposed alternatives that would yield Shs252 billion but with no tax adverse effect on the economy and the people,” said Julius Mukunda of Civil Society Budget Advocacy Group.