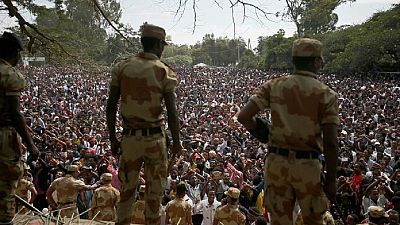 <p><strong>Amnesty International has asked the government of Ethiopia to disband a police unit which is accused of carrying out human rights abuses in the Somali and Oromia regions of the country.</strong></p> <p>The Liyu police unit was established by the Somali regional government as a counter-terrorism force but has on several occasions been accused of complicity in an ethnic conflict between Oromos and Somalis.</p> <p>Amnesty says members of the unit burnt down almost 50 homes belonging to Oromo families earlier this week.</p> <p>“The Ethiopian authorities must immediately demobilize the Liyu police and replace them with police that abide by international human rights law,” said Joan Nyanyuki, Amnesty International’s Director for East Africa, the Horn and the Great Lakes.</p> <h3>Rogue ‘counter-terror’ unit</h3> <p>The unit was set up in April 2007 as a special paramilitary force known as “Liyu Police” in response to an attack by the Ogaden National Liberation Front (<span class="caps">ONLF</span>) rebel group on a Chinese oil exploration that killed 74 Ethiopians and nine Chinese workers. </p> <p>But as early as 2008, human rights groups accused the unit of committing executions, torture, rape, and forced displacement in the Somali Region.</p> <p>Amnesty said the unit must be disbanded and perpetrators of human rights violations brought to book to dispel the belief that the Somali regional state sanctions the violence meted out.</p> <p>“The authorities must put an end to what appears to be state-sanctioned violence. The first step is to ensure all policing in Oromia is respectful of human rights. The next is to hold those responsible for these attacks to account through thorough, impartial and independent investigation.”</p> <h3><a href="http://www.africanews.com/2017/11/26/oromia-ethiopian-somali-conflict-over-100-suspects-arrested-govt/"target="_blank">Oromia – Ethiopian Somali conflict: Over 100 suspects arrested – govt</a></h3> <h3>Abiy meets human rights commission boss</h3> <p>The calls come shortly after the new prime minister of the country, Abiy Ahmed reaffirmed government’s commitment to protect human rights of citizens.</p> <p>In a meeting with the Commissioner of the Ethiopian Human Rights Commission (<span class="caps">EHRC</span>), Dr Addisu Gebre-Egziabher, Abiy was specifically briefed about the lack of commitments by federal and regional institutions in accepting and implementing the commission’s decisions.</p>

The Ethiopian authorities must immediately demobilize the Liyu police and replace them with police that abide by international human rights law.