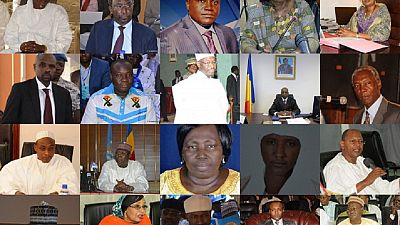 <p>President of the Republic of Chad, Idriss Deby announced a new cabinet on Monday. </p> <p>The new government, announced by decree, consists of 29 members, including eight women.</p> <p>The formation of the new government comes days after the promulgation of a new constitution which gives the president broader powers and abolishes the post of prime minister.</p> <p>Ten former public figures are leaving the government, including the Minister of Infrastructure, Finance and the Minister of Oil.</p> <p>The Defence Ministry, security and the Ministry of foreign affairs portfolios were retained.</p> <p>Kassire Coumakoye, former Prime Minister is now Minister of State Advisor to the Presidency, with lawyer Jean-Bernard Padare being named Minister of State in charge of Infrastructure.</p> <p>Most opposition lawmakers boycotted the legislative vote. Three days after the vote, Deby’s previous government resigned.</p>