Aubameyang, Iwobi dazzle as Arsenal's Wenger bows out at Emirates 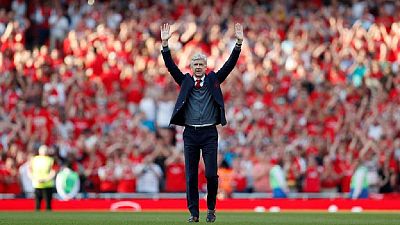 <p>Arsenal’s Arsene Wenger has in his time at the club managed a sizeable number of African players. Two of his current African players dazzled as Arsenal played their last home game for the 2017/2018 English Premier League season.</p> <p>The game against Burnley at the Emirates Stadium was also the last at the venue for Wenger. The Frenchman leaves the English Premier League side after twenty-two years in charge.</p> <p>Gabonese international Pierre Emerick Aubameyang scored the first and last goals of a 5 – 0 thrashing of Burnley in front of a full house. Aubameyang who transferred from German side Dortmund was officially Wenger’s last signing.</p> <p>Academy product and Nigerian international Alex Iwobi also put up a man of the match display and scored a goal. The other two goals were by Kolasanic and Lacazette.</p> <p><img src="https://static.euronews.com/articles/46/44/464443/1024x576_bonus-IwobiAuba.jpg" alt="" /></p> <p>Wenger was given a guard of honour before the game started. He returned after the final whistle to do a lap of honour around the Emirates. He won two league titles and seven FA cup trophies during his stay.</p> <p>Despite reaching two European Cup finals, Wenger’s teams at the time failed to clinch the continental accolades. His European dreams this season ended when Arsenal lost to Atletico Madrid last week in the Europa League competition.</p> <p>He is Arsenal’s longest serving and most successful manager. Scores of his former players were at the Emirates for the send off. The hashtag #MerciArsene trended on twitter.</p> <p>The club gave Wenger a miniature golden trophy that was handed to them for the record unbeaten season run in 2003/2004.</p>