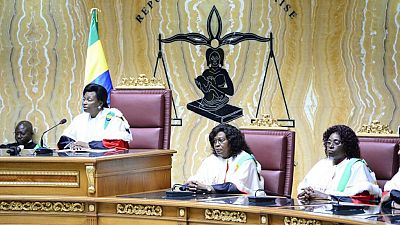 <p>Gabon’s Constitutional Court on Monday ordered the dissolution of the National Assembly thus bringing the work of the Ali Bongo-led government to an end</p> <p>A statement read out by its president Marie Magdeleine Mborantsuo said the mandate of all lawmakers in the lower chamber of parliament had been terminated because the government had failed to hold elections to replace them.</p> <p>It was now incumbent on Bongo to appoint a new Prime Minister, leader of government, to steer affairs of the oil-rich central African nation. Till then, the upper chamber (Senate) has been tasked with doing the work of the dissolved chamber.</p> <p>Prime Minister Emmanuel Issoze-Ngondet who was ordered by the court to resign said he accepted the ruling which was sacrosanct.</p> <p>“The decisions of the Constitutional Court are not to be commented on. They are to be applied,” Issoze-Ngondet said on national television after the ruling.</p> <p>On his part, Richard August Onouviet, the president of the National Assembly, also said he accepted the court’s decision.</p> <p>A multi-party committee appointed an electoral commission last Friday after repeated delays to organise the vote but no new election date has yet been set. The government had failed to organize parliamentary elections before the end of April.</p> <p>Bongo appointed Issoze-Ngondet prime minister after a narrow victory in a 2016 election that international observers said was marred by irregularities and that sparked brief spasms of violence.</p>