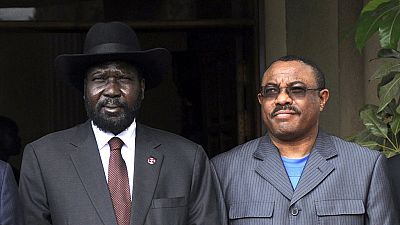 <p>Ethiopia’s former prime minister Hailemariam Desalegn has stressed the need for South Sudan president Salva Kiir to step down and allow the country to be guided to peace by a new face.</p> <p>Desalegn added that it was increasingly becoming clear that peace agreements between the government and rebel groups were not going to be respected.</p> <p>“Immediately after my resignation, I asked them, please would you resign because you failed to resolve the problem in South Sudan?” Desalegn disclosed during a governance summit held in Rwanda over the weekend. </p> <p>“Leaders have to come to their senses … and they should somehow leave so they give power to new blood (leadership) that can lead the country to the next level,” he said.</p> <p>Desalegn was chairman of the regional Intergovernmental Authority on Development (<span class="caps">IGAD</span>) which brokered the 2015 peace deal between Salva Kiir and opposition chief Riek Machar. Machar is currently in exile in South Africa.</p> <p>“Agreements are signed and never implemented and I see further more agreements can be signed but I don’t think they will be implemented as the history shows,” he added.</p> <p>Desalegn resigned his position as premier in mid-February 2018 in an effort to allow political reforms to be carried out by the ruling <span class="caps">EPRDF</span> coalition. He was replaced by Abiy Ahmed – the first ethnic Oromo to occupy the post.</p> <p>In the recent past, President Kiir has warded off a push by the opposition demanding that he resigns from his post. Meanwhile, the latest round of peace talks in Addis Ababa has been postponed after two rounds.</p> <p>The country is suffering a multi-layer crisis with spreading insecurity leading to a humanitarian crisis as people continue to be internally displaced. Thousands have fled and are in refugee camps across the region. A economic slump has all but worsened and already bad situation.</p>