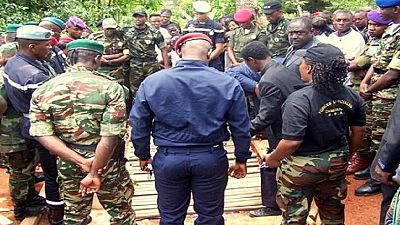 <p>Localities in Cameroon’s southwest region experienced heavy gunfire exchanges between the state security forces and suspected separatists elements leading to the death of a soldier on Thursday.</p> <p>Governor of the restive region, Bernard Okalia Bilai told the Anadolu news agency that the separatist elements had mounted road blocks in parts of the region, when the army went to clear them, the hostilities ensued.</p> <p>“Armed gangs of “Ambazonia” (a terrorist group according to government) barricaded several roads in the region and when soldiers went down to clear the tracks, these terrorists attacked our forces,” he said. </p> <p>The exchanges left residents stranded, some caught in the crossfire had to flee into the bushes whiles others also fled for fear of reprisals from the army, as has usually been reported.</p> <p>While some officials have reported a death in the regular army, all day yesterday no official report was made public.<br />  <br /> Civilians have borne the brunt of these armed confrontations in Cameroon’s minority Anglophone region. “Soldiers go from house to house and arrest young people suspected of belonging to the Ambazonia Defense Force (<span class="caps">ADF</span>). Those arrested are sequestrated, beaten and their homes burned,“said John Ngu, one of the villagers, adding that several villages have been deserted in the last 24 hours.</p> <p>The allegations of security highhandedness has been dismissed severally by the army. Colonel Didier Badjeck, spokesman for the army insisted that “the army does its job professionally and with respect for human rights.”</p> <p>About 40 security personnel – soldiers, police, gendarmes – and more than 500 civilians have been killed in English-speaking areas since the outbreak of the so-called Anglophone crisis in late 2016, according to the Network of Human Rights Defenders of Central Africa (<span class="caps">REDHAC</span>). </p> <p>In addition, according to the United Nations High Commissioner for Refugees (<span class="caps">UNHCR</span>), more than 7,000 people have reportedly fled to Nigeria’s Cross River State. The Nigerian Emergency Management Agency (<span class="caps">SEMA</span>) refers to the figure of 28,000.</p>