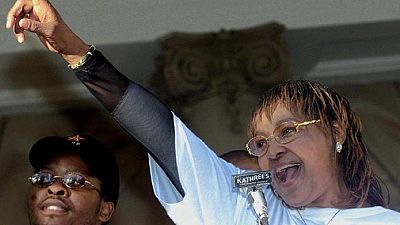 People from across the world continue to celebrate the life and legacy of the former Mrs. Mandela. South Africa has announced a state burial for the woman referred to as ‘Mother of the Nation.’

The controversies surrounding her personality, however persists, while some till date see and consider her South Africa’s heroine, some are not of a similar opinion.

Africanews looks back at who Winne Madikizela-Mandela was and whiles at it, presenting a series of photos of her life.

Born on Sept. 26, 1936, in Bizana, Eastern Cape province, Madikizela-Mandela became politicised at an early age in her job as a hospital social worker. 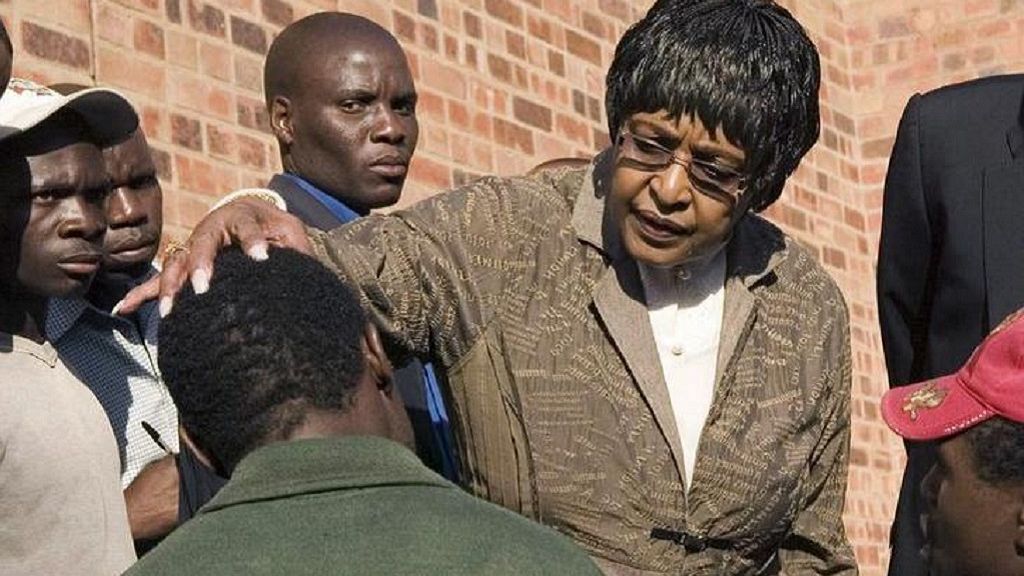 Winnie Madikizela Mandela visits refugees who had taken shelter at a police station in Johannesburg’s Alexandra township May 14, 2008.

In her twilight years, Madikizela-Mandela had frequent run-ins with authority that further undermined her reputation as a fighter against the white-minority regime that ran Africa’s most advanced economy from 1948 to 1994. 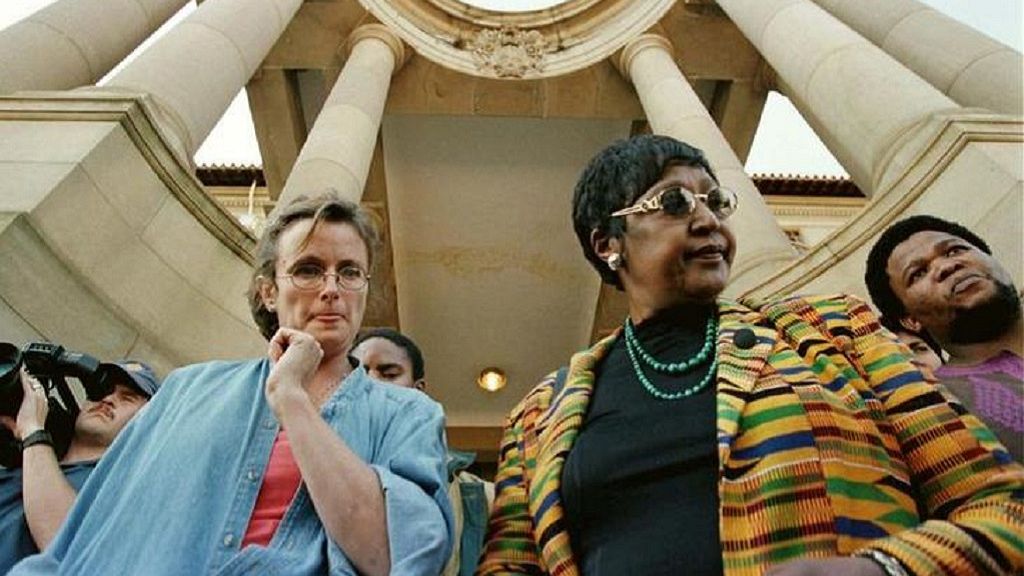 Winnie Madikizela Mandela and Paula McBride lead the ‘free Robert McBride campaign’ in front of the Department of Foreign Affairs in the Union Buildings, Pretoria, June 1 1998.

During her then husband’s 27-year incarceration, Madikizela-Mandela campaigned tirelessly for Nelson Mandela’s release and for the rights of black South Africans, suffering years of detention, banishment and arrest by the white authorities. 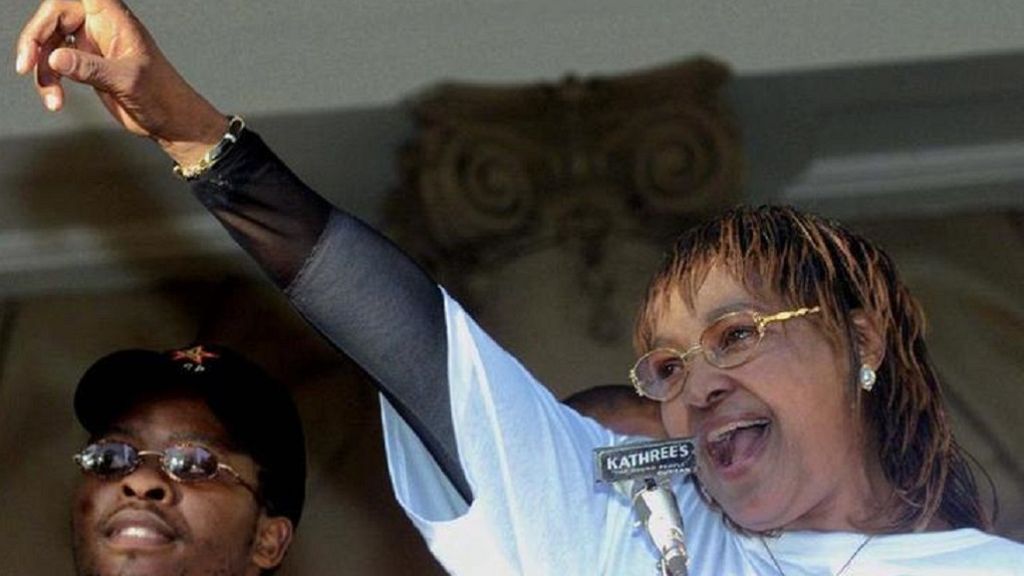 Blamed for the killing of activist Stompie Seipei, who was found near her Soweto home with his throat cut, she was convicted in 1991 for kidnapping and assaulting the 14-year-old because he was suspected of being an informer. 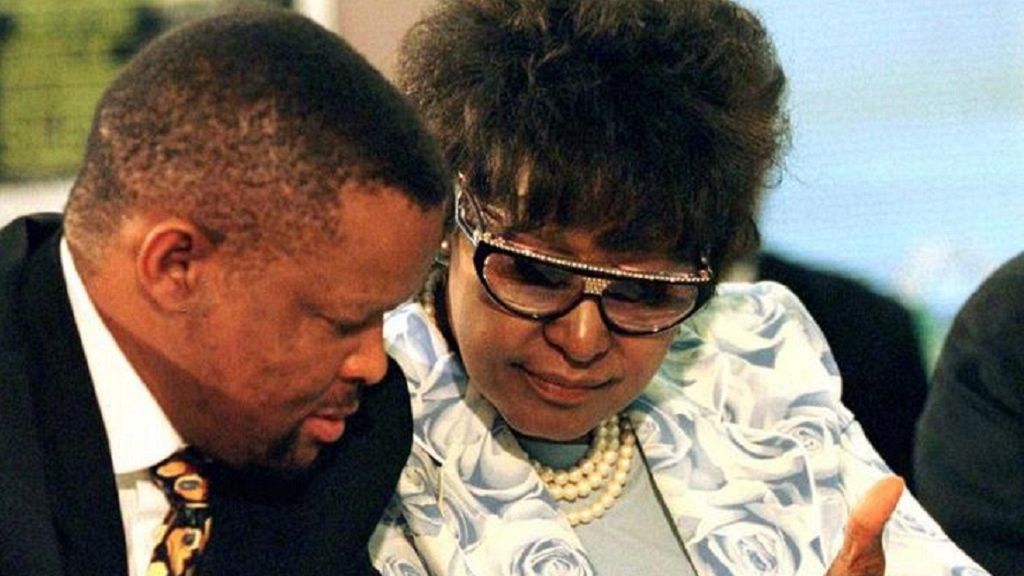 She and Mandela separated in 1992 and her reputation slipped further when he sacked her from his cabinet in 1995 after allegations of corruption. The couple divorced a year later, after which she adopted the surname Madikizela-Mandela. 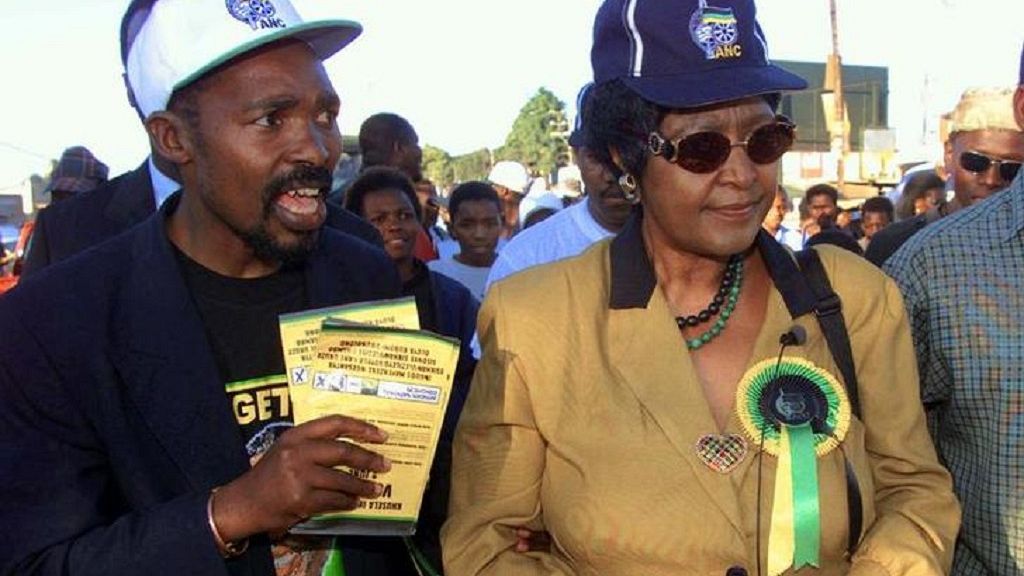 Reports indicated that Madikizela-Mandela’s public standing plummeted, her relationship with the party she loved soured. She bore the air of a troublemaker, arriving late at rallies and haranguing comrades, including Thabo Mbeki, Mandela’s successor as president. 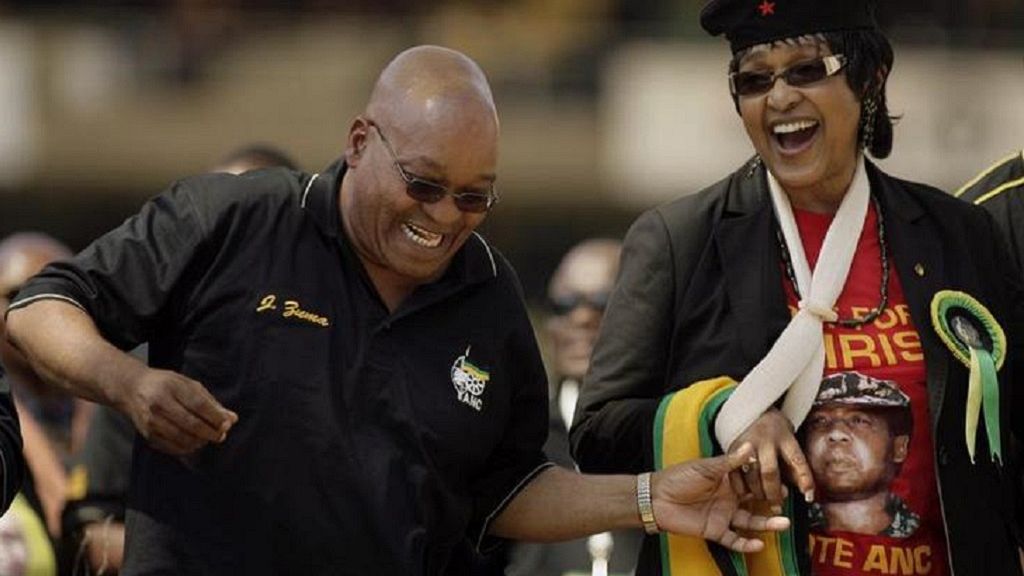 Four years later, she was back in court, facing fraud and theft charges in relation to an elaborate bank loan scheme. 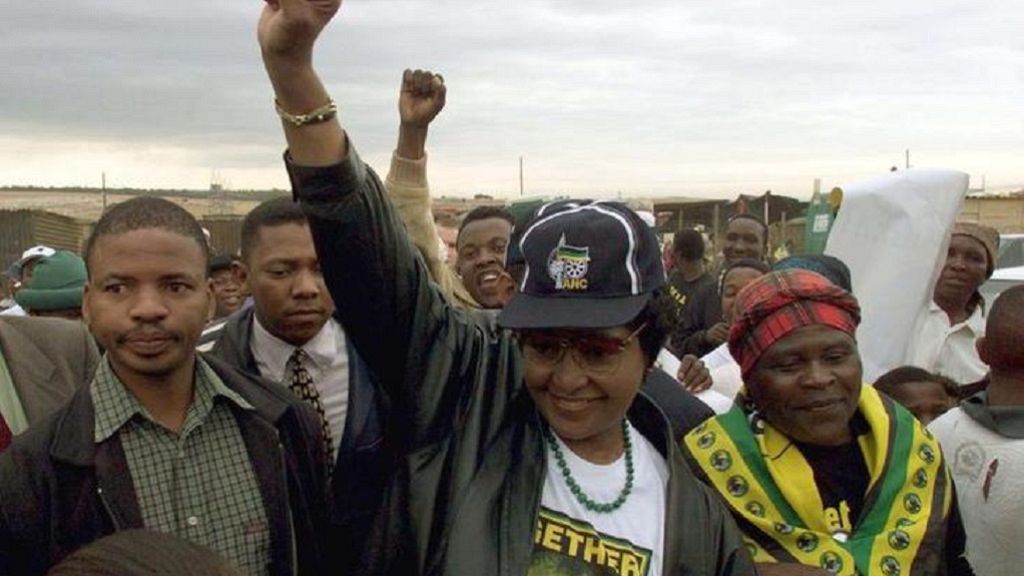 Winnie Madikizela-Mandela raises her fist as she arrives at the Olievenhout Bosch shanty town outside of Pretoria April 21, 1999.

Her uncompromising methods and refusal to forgive contrasted sharply with the reconciliation espoused by her husband Nelson Mandela as he worked to forge a stable, pluralistic democracy from the racial division and oppression of apartheid. 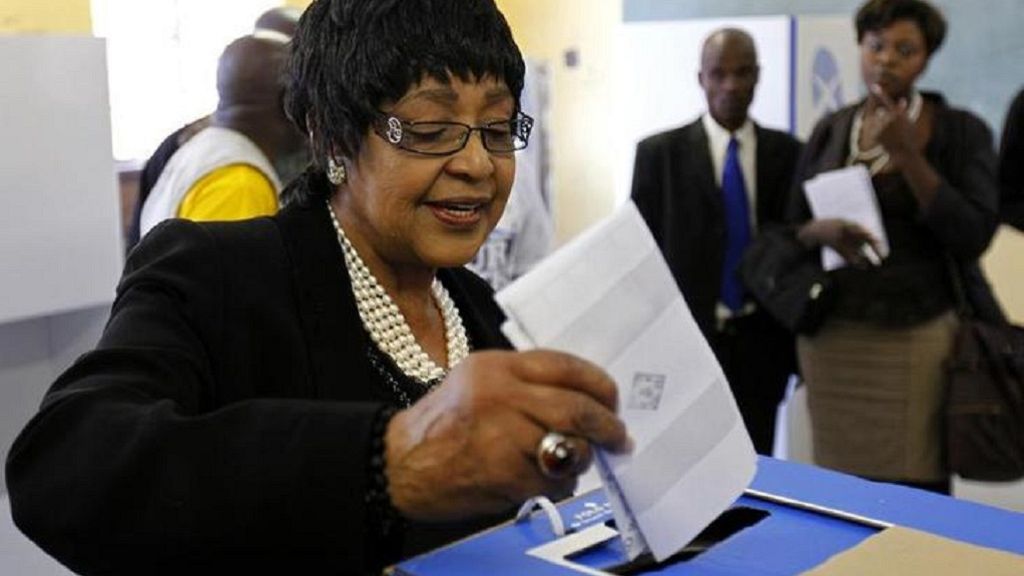 Winnie Madikizela Mandela,former wife of Nelson Mandela, casts her vote during the South African municipal elections in Soweto May 18, 2011.

As evidence emerged in the dying years of apartheid of the brutality of her Soweto enforcers, the “Mandela United Football Club” (MUFC), her soubriquet switched from ‘Mother of the Nation’ to ‘Mugger’. 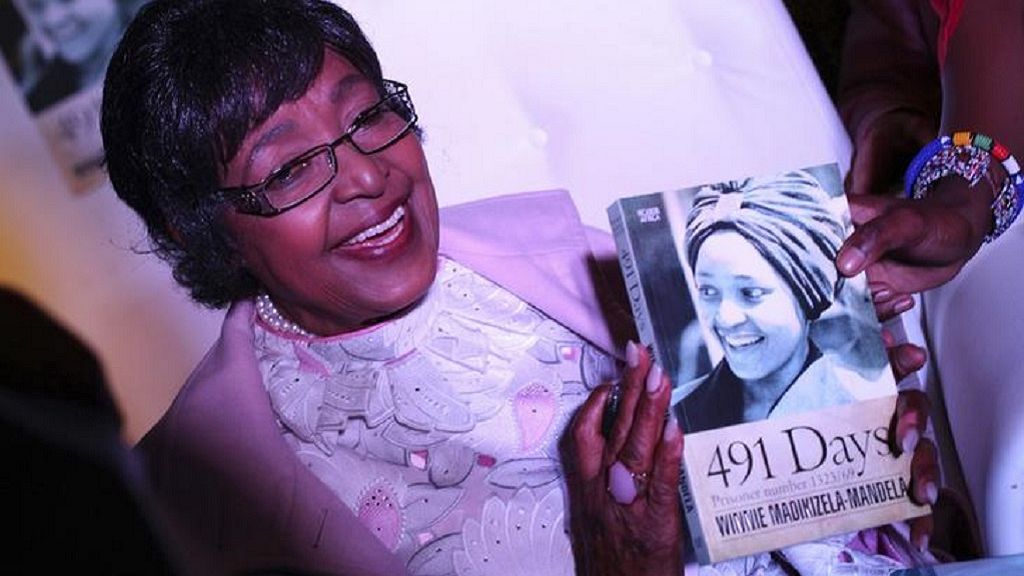 Winnie Madikizela-Mandela, ex-wife of former South African President Nelson Mandela, smiles during a celebratory event around the release of her book titled 491 Days in Johannesburg August 8, 2013.