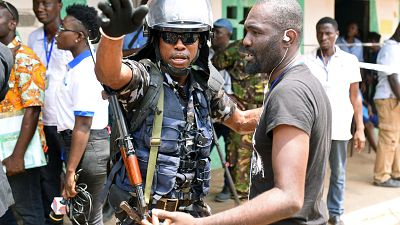 The candidate of the main opposition Sierra Leone Peoples Party (SLPP), Julius Maada Bio, blamed the presence of security forces at polling stations for the low turnout during the second round of a presidential election on Saturday.

Voting got under way early in peaceful conditions, according to witnesses, though some complained that a heavy police presence inside polling stations was deterring people from casting their ballot.

Staff at two polling stations said turnout in the morning was lower than in the first round. Many were forced to walk to their nearest voting station because of a driving ban imposed on election day for security reasons.

Concern about policing comes after the National Electoral Commission last week said that police had tried to intimidate staff in the run-up to the election.

Another member of the opposition Sierra Leone People’s Party (SLPP) is said to have argued with military personnel outside a Freetown polling station on Saturday, still unhappy about the presence of police and soldiers inside polling stations during the presidential run-off.

After complaining to the National Electoral Commission at Wilberforce polling station, the SLPP’s Kabineh Kalon demanded the soldiers leave the stations immediately.

Major Paow Kagbo said the armed forces had been inside the polling stations to ensure a peaceful ballot, but after the argument he agreed to put all police officers and soldiers outside.

Compared to the first round of elections on March 7 the turnout on Saturday morning was low. Some voters said they were intimidated by the presence of police and soldiers at polling stations and were afraid to go. The government said it had deployed more security forces after several incidents of violence between the first and second round.

The face-off between Maada Bio and ruling party standard-bearer Samura Kamara was supposed to take place on Tuesday (March 27) but was rescheduled after a complaint about fraud in the first round of voting this month from a member of Kamara’s All People’s Congress.