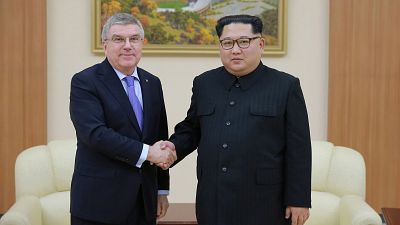 Bach traveled to Pyongyang on Thursday in a visit that comes after North Korea’s participation in the Pyeongchang Winter Games helped ease tensions over the Korean peninsula. Athletes from North and South Korea marched under a unified peninsula flag at the opening ceremony in Pyeongchang, and the two Koreas have seen a significant thaw in tensions since.

Speaking to reporters at Beijing airport upon his return, Bach said North Korea will participate in the 2020 Summer Games in Tokyo and the 2022 Winter Games in Beijing.

The North’s official Korean Central News Agency (KCNA) said Bach told Kim the trip was to “express the most heartfelt thanks” to North Korea’s leader for helping make February’s the Pyeongchang Winter Olympics a Games that were “symbolic of peace.”