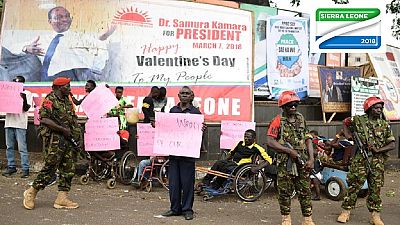 Sierra Leone’s presidential runoff vote has been postponed to Saturday, March 31 by the Supreme Court, the elections body announced late Monday (March 26) in an official statement.

The original date was tomorrow March 27 but a High Court injunction affected the electoral body’s preparation leading to the four-day extension.

Lawyers for the Sierra Leone National Electoral Commission (NEC) approached the apex court for the extension hours after the High Court lifted its injunction on the process.

Maada Bio won the first round of voting which took place on March 7 but could not garner the required 55% to secure a straight victory. The March 7 process had sixteen contenders on the ballot paper.

But according to the constitution, only the two leading candidates go into a runoff in case there is no first-round winner.

The runoff is the last leg of general elections that saw the West African country elect lawmakers and local councillors. The process has been scored as largely free and fair despite concerns about intimidation and tribe-linked violence.

Winner of the vote between Maada Bio – a former military Head of State and Samura Kamara – the immediate past Foreign Affairs Minister, will take over from outgoing Ernest Bai Koroma who was ineligible to run after two successive mandates.