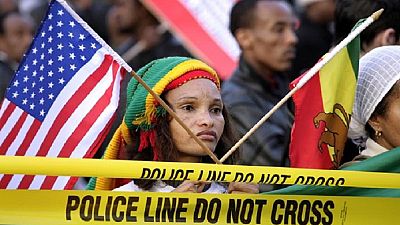 <p>The United States Congress will finally vote on a human rights resolution against the Ethiopian government in the second week of April, a Congressman deeply involved in the process has announced.</p> <p>According to Rep. Mike Coffman who represents Colorado’s Sixth Congressional District, the vote is a sign that “The fight for respect of human rights & inclusive governance in Ethiopia continues.”</p> <p>In a tweet of March 21, 2018; he said the bi-partisan House Resolution 128 was scheduled to be voted upon in the week of April 9 after months of work by all involved.</p> <blockquote class="twitter-tweet" data-lang="en"><p lang="en" dir="ltr">I’m happy to announce that after months of hard work (by all involved) <a href="https://twitter.com/hashtag/HRes128?src=hash&ref_src=twsrc%5Etfw">#HRes128</a> is scheduled for a vote the week of April 9. The fight for respect of human rights & inclusive governance in <a href="https://twitter.com/hashtag/Ethiopia?src=hash&ref_src=twsrc%5Etfw">#Ethiopia</a> continues… <a href="https://t.co/hF1lvOBCZs">pic.twitter.com/hF1lvOBCZs</a></p>— Rep. Mike Coffman (@RepMikeCoffman) <a href="https://twitter.com/RepMikeCoffman/status/976487361315004416?ref_src=twsrc%5Etfw">March 21, 2018</a></blockquote> <script async src="https://platform.twitter.com/widgets.js" charset="utf-8"></script> <p>In October 2017, a pro-democracy group, Freedom House, accused Ethiopia of literally <a href="http://www.africanews.com/2017/10/18/ethiopia-govt-hiding-behind-security-to-halt-us-congress-resolution-ethiopia/" target="_blank"> blackmailing the U.S. Congress </a> with a threat to withhold counter-terrorism cooperation if the vote went ahead.</p> <p>Freedom House quoted Republican Congressman Mike Coffman as confirming that Ethiopia’s position was relayed by its ambassador in Washington who said the country will “stop counter-terrorism cooperation with the United States if Congress went ahead with a planned vote on a resolution calling for human rights protections and inclusive governance in the country (H. Res. 128).” </p> <p>But the turn of events, with the vote scheduled to go ahead means that the Congress had ‘thrown out’ the threat from Addis Ababa. </p> <p>Freedom House’s statement dated October 16, 2017 was titled “U.S. Congress Should Call Ethiopia’s Bluff,” with its Senior Program Officer for Africa, Joseph Badwaza, egging Congress to proceed with its efforts and discard the Ethiopian government’s “bullying tactics.”</p> <p>“Passing H. Res. 128 would send a powerful message to Addis Ababa to get serious about undertaking reforms, and the Ethiopian government’s bullying tactics should not derail it. Members of Congress should call the bluff, place the resolution back on the House agenda, and approve it. </p> <p>“Experience shows that Ethiopia would never follow through on the threat to halt security cooperation. The government fully understands who would be the ultimate loser if it did,” Freedom House said.</p> <h2>What is the H. Res. 128 about?</h2> <p>H. Res. 128 is a human rights centered move with strong bipartisan support in the U.S. Congress, it has as many as 71 cosponsors. </p> <p>The resolution passed the House Foreign Affairs Committee unanimously in late July 2017 and was scheduled for a vote by the full House on October 2. </p> <p>One of its authors, Republican Congressman Chris Smith said during the committee mark-up, the resolution is like a mirror held up to the government of Ethiopia, and it is intended to encourage them to recognize how others see them and move forward with reforms.</p> <p>“While the resolution contains provisions that call for sanctions — under the Global Magnitsky Act— against Ethiopian officials responsible for committing gross human rights violations, the more important reason why the government took the severe step of threatening the U.S. Congress is the damage that this resolution could do to the country’s image,” Freedom House averred.</p>

Passing H. Res. 128 would send a powerful message to Addis Ababa to get serious about undertaking reforms, and the Ethiopian government’s bullying tactics should not derail it.