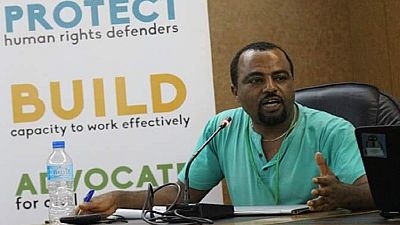 A university lecturer and prominent blogger in Ethiopia, Teshome Seyoum, was due to appear in court on Thursday (March 22) but the police failed to produce him, local media and rights group reported.

The Addis Standard portal quoted his family members as saying prison authorities said he could not appear in court because ‘he was detained under the state of emergency.’

Teshome, who publishes theEthiothinktank blog, was reportedly picked up by security forces on Thursday (March 8) at his home near the Woliso campus of Ambo University, where he lectures, witnesses told the Voice of America and Deutsche Welle news outlets.

Ethiopia cannot again use the cloak of a national emergency to round up journalists and stifle critical voices.

He was put before court in the capital Addis Ababa and the judge gave police fourteen days to establish a case against him.

The reason for his arrest is because he had criticised government’s decision to impose a state of emergency on February 16, barely twenty-four hours after Prime Minister Hailemariam Desalegn resigned his position. Government said the move was to curb rising insecurity nationwide.

According to Robert Mahoney of deputy executive director of Committee to Protect Journalists (CPJ) Ethiopian authorities are hiding behind the SOE cloak to stifle critical voices like Seyoum, adding that they have often failed to follow due process in detaining such voices.

“Ethiopia cannot again use the cloak of a national emergency to round up journalists and stifle critical voices,” Mahoney said in a CPJ statement reacting to Seyoum’s arrest.

“This is the second time that authorities ignored due process to detain Seyoum Teshome. He should be released immediately and unconditionally,” Mahoney added.

He is held at the Maekelawi prisons located in Addis Ababa. The facility notorious for its use of torture according to several human rights groups and former detainees is earmarked for closure, as part of political reforms announced in January this year.

PM Desalegn is still holding on to his position temporarily as the ruling coalition’s council meets to elect his successor.