<p>When talking about super hero films, the heros that come to your mind are Superman, Batman and just recently Black Panther.</p> <p>All these super heroes were created in Hollywood. America’s biggest film industry.</p> <p>Even though Africans and black communities all over the world got excited with the arrival of the Black Panther film, still this super hero was created in Hollywood.</p> <p>But there’s a new hero in town…Sandale-man! Yes, this super hero created by Senegalese filmmakers is a force to be reckoned with.</p> <p>Just like the likes of Spiderman, he protects and aids people in Senegal from petty criminals. From his name, Sandale-man, he gets his powers from his sandales.</p> <style>.embed-container { position: relative; padding-bottom: 56.25%; height: 0; overflow: hidden; max-width: 100%; } .embed-container iframe, .embed-container object, .embed-container embed { position: absolute; top: 0; left: 0; width: 100%; height: 100%; }</style><div class='embed-container'><iframe src='https://www.youtube.com/embed/mSc8ZPQ-CwM' frameborder='0' allowfullscreen></iframe></div> <p>The director of La Légend de Sandale-man is Ayina Thiam. And his original intent was to create a mock-superhero film about a young hero whose special skillset is kicking butts with superhuman, sandal throwing accuracy and customized sandal weaponry.</p> <p>The Sandale-man films were not created on a big budget. Considering their limitations, Ayina Thiam, Jean Jacques Toue, co-director of the Sandale-man films, and fellow crew members, were still able to create stunning comic books to incorporate in the film. </p> <p>Sandale-man is a beautiful representation of African producers coming together to both support one another and expand the Senegalese film and entertainment industry without waiting for outside assistance.</p> 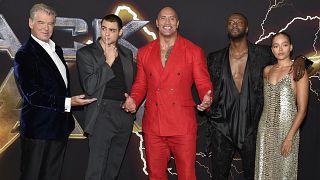