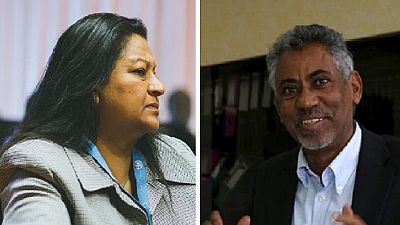 Eritrea has responded to the latest report by the United Nations slamming its human rights situation. Information Minister Yemane Ghebre Meskel accused the U.N. special rapporteur of being morally bankrupt and defaming Eritrea.

“Sheila Keetharuth’s (“Special Rapporteur”) moral bankruptcy is grotesquely on display as she yet again issues a defamatory Press Release against Eritrea under the mantle of the UNHRC by grossly misrepresenting facts and events,” he said in a tweet on Friday.

It is not the first time that Eritrea has clashed with Keetharuth in the line of her work. The U.N. Human Rights chief in November singled out Burundi and Eritrea as member country’s that were threatening her because of her work.

Keetharuth in a recent presentation told a U.N. Human Rights Council meeting in Geneva that Eritrean authorities had detained hundreds of perceived opponents this month after a school director who defied government orders died in custody. She added that most of those arrested were males and some were as young as 13.

Sheila Keetharuth is willfully distorting reality to advance her wicked agenda. The UNHRC cannot apparently control the Frankenstein of their own creation even as many Member States privately express embarrassment about her whole demeanor

She is on record to have said that leaders of the country in the Horn of Africa should be tried for crimes against humanity including torture, rape, murder and enslaving hundreds of thousands of people, a U.N. investigation set up by the Council said in 2016.

Of Ethiopia’s main human rights headaches according to reports are the forced conscription of people into the military. The government insists the measure to sure up their security in the face of an aggressive neighbour in Ethiopia.