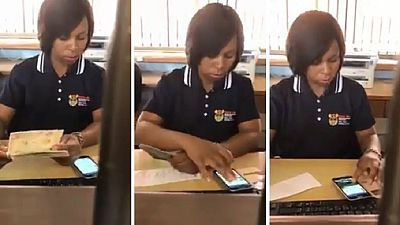 An airport official in South Africa is set to face disciplinary measures after she was seen concentrating on her phone while serving a traveler.

A short video of the unnamed home affairs officer has gone viral on social media. It was tweeted by former police minister, Fikile Mbalula who asked that more of such acts be exposed.

Then the sector minister, Malusi Gigaba, weighed in later stating that he has instructed the Home Affairs department to investigate the matter and take necessary action.

I was this morning informed about the video circulating on social media platforms, and have asked the Department of HomeAffairsSA to investigate this matter and take swift action against the official. pic.twitter.com/ZwllSemEyZ

Meanwhile people on social media expressed varying opinions on the video, majority of them held that the practice was pervasive not only at the airports but throughout most public places like hospitals, stores and government departments.

The incident brings to the fore the debate about whether employees should be allowed to use social media during working hours.

The Minister himself, Gigaba, was earlier this year spotted playing a computer game (Candy Crush) on a gadget, as President Ramaphosa was delivering an address in parliament.