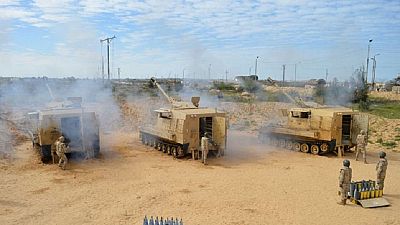 <p>Egypt’s military on Sunday disclosed 16 jihadists, an officer and a soldier were killed in the past four days during a major military operation against Islamic State group jihadists in Sinai.</p> <p>The army launched a sweeping campaign after Egyptian President Abdel Fattah al-Sisi, who is standing in elections for his second term this month, gave them a three-month deadline to crush IS in Sinai.</p> <p>He issued his ultimatum in November after suspected IS gunmen massacred more than 300 worshippers in a Sinai mosque associated with Sufi Muslim mystics.</p> <p>Since the military, then led by Sisi, ousted Islamist president Mohamed Morsi in 2013, security forces have sought to quell attacks by the Egypt branch of IS.</p> <p>The jihadists have killed hundreds of soldiers, policemen and civilians, mainly in North Sinai but also elsewhere in Egypt.</p> <p>They have also killed scores of Christians in church bombings and shootings, as well as bombing a Russian airliner carrying tourists from an Egyptian resort in 2015, killing all 224 people on board.</p> <p>The military says it has evidence IS has sought to move members to Sinai following its defeats in Iraq and Syria.</p>