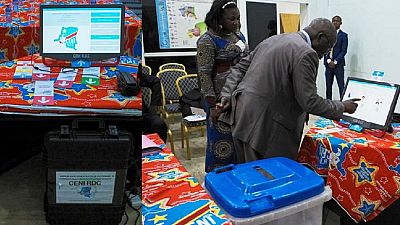 When election officials unveiled voting machines that resemble large tablet computers in Democratic Republic of Congo, they hailed them as the solution to a multitude of problems.

The new technology, they said, would cut costs, help reduce electoral fraud and accelerate the counting of votes in the vast central African country where past elections have been marred by voting irregularities or violence.

The national election commission (CENI) sees the voting machines as vital for holding long-delayed elections on Dec. 23 that will choose a successor to President Joseph Kabila, who refused to step down when his mandate expired in December 2016.

If we have these problems in Kinshasa, what hope is there for the rest of the country?

It proved an inauspicious start. The voting machine, imported from South Korea, broke down when it was demonstrated to a parliamentary commission in the capital, Kinshasa, a member of the committee told Reuters.

“If we have these problems in Kinshasa, what hope is there for the rest of the country?” said the committee member, parliamentarian Toussaint Alonga.

One of the machines also malfunctioned during a presentation to two opposition parties last month, the parties’ leaders said.

The parties, the Union for the Congolese Nation and Movement for the Liberation of Congo, later issued a joint statement saying they rejected the machines’ use.

They say the machines will cause chaos and increase the risk of fraud or voting irregularities that could lead to protests and violence.

The election commission however insists that the election will not go ahead without the new technology.

The opposition fear the president is looking for a pretext to delay the election until he can organise a referendum that would let him seek a new term, as leaders have done in neighbouring Congo Republic and Rwanda.

Western governments and investors regard the election as a crucial step towards ending political instability that is impeding investment in Congo, which is rich in natural resources but mired in poverty and economic and humanitarian crises.

With the new technology, votes are cast by tapping the names of candidates listed on a screen. The voting machine then prints a ballot paper with those choices, sparing the need to pre-print large ballots with the names and photos of dozens of candidates.

With 100,000 machines in service over 11 hours of voting as stipulated by law, each voter in Congo would have under 90 seconds to select candidates in presidential, legislative and provincial elections and print out the ballot.

The technology has never been used in a major election and doubts about the reliability of Congo’s power supply and the machines’ functionality in the sweltering heat have increased fears that voting will be marred by chaos.

Election authorities have released few details about the machines’ acquisition except to say they come from South Korea. Eight machines arrived in Kinshasa in January and 200 more last week, the commission said, but it has not indicated when the full complement will arrive.

Prime Minister Bruno Tshibala, whose transitional “unity” government is organising the election, told Reuters this week that Congo was still on course to hold the election on Dec. 23.

Despite the assurances, donors are wary. They have disbursed only a fraction of the $123 million the United Nations expected to set aside for elections in Congo as they await clarification on how the voting will be conducted.

Nikki Haley, the U.S. ambassador to the United Nations, warned Congolese authorities last month to use paper ballots or lose U.S. support because using an electronic voting system could undermine the credibility of the election.

Some people are worried because of what happened in Kenya, a far more developed and connected nation where voter identification technology failed in half of polling places in 2013 and concerns about the reliability of electronic vote tallies led the Supreme Court last year to order the presidential vote to be re-run.

Namibia was the first African country to use electronic voting in a national election in 2014 but it has only 1.2 million registered voters compared to Congo’s 46 million and the official rollout followed extensive testing in by-elections.

With 100,000 machines in service over 11 hours of voting as stipulated by law, each voter in Congo would have under 90 seconds to select candidates in presidential, legislative and provincial elections and print out the ballot.