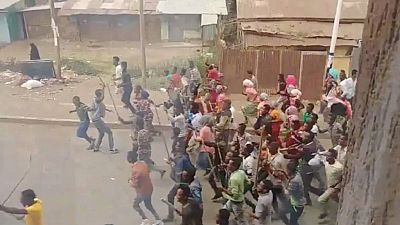 The Ethiopian government has admitted a violent pushback to a recently ratified state of emergency (SOE). A number of security of forces have reportedly been attacked and their weapons confiscated.

The privately-owned Addis Standard news portal quoted defense minister and head of the Command Post administering the SOE, Siraj Fegessa, as comparing the fightback as a ‘coloured revolution.’

“Seventeen security forces were hurt so far, according to Siraj. He also said several areas have witnessed property damages including looting, breaking ins and torching of government offices – particularly Woreda and Kebele offices – as well as burning of public buses and government vehicles.

“Four vehicles were torched beyond repair and ten vehicles, including public buses, were destroyed in various places,” the Addis Standard report said.

Fegessa was on Wednesday (March 7, 2018) presenting the first report on implementation of the SOE, barely a week after it was controversially ratified in a parliamentary vote. Activists insist the vote failed and speaker Abadulla Gemeda apologized for a numbers mix-up.

The minister also disclosed that there had been arrests made under the emergency rule – he, however, did not give details of where the arrests were made or how many people had been detained.

His report coincided with the final day of a social shutdown religiously observed across the Oromia region. The measure was called by online activists and youth to protest the state of emergency. The action disrupted economic activities as the capital Addis Ababa was cut off from other parts of the country.

The minister also admitted that road blockages were rampant in parts of the country but said 80 – 90% of such incidences had been cleared.

He blamed online activists behind the social boycott for the hard time security forces were having and further referred to them as ‘anarchists,’ bent on illegally seizing state power.

Fegessa fended off talk of divisions in government. According to him, the government has never been united than at this time. The country is without a substantive Prime Minister after the resignation of Hailemariam Desalegn.

The current state of emergency was announced a day after Desalegn’s resignation. The ruling EPRDF accepted the resignation but asked him to stay on till a successor is picked. The coalition heads to congress this weekend to pick a new leader and Prime Minister.