Top Ethiopian activist blocked by Facebook for 'posting too fast' 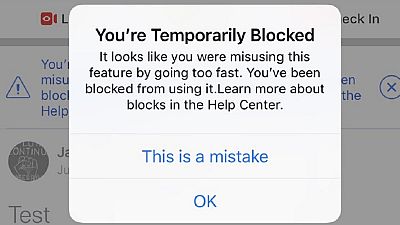 An Ethiopian media owner and online activist known for his active use of Facebook has been blocked by the platform.

It is not the first time Facebook is blocking Jawar Mohammed’s account on the basis of hyperactivity – “posting too fast,” as they chose to put it.

Jawar on Wednesday confirmed via his verified Twitter account that he had been “temporarily blocked,” on Facebook. “It looks like you were misusing this feature by going too fast. You’ve been blocked from using it,” he was informed.

The United-States based activist slammed Facebook over the block but announced a new page through which he planned to continue his work.

For now I will be using this page to update about developments in Ethiopia. La Aluta Continua!!https://t.co/nqLewR6Mck

This becomes the third time his account has been suspended for the same reason. He was blocked in mid-February for about a day then earlier this week for a brief period of time.

His blocked account was a personal page that had reached its 5000 limit. he had a follower base of 1.3 million plus. His new page at the time of this publication had over 83,000 followers.