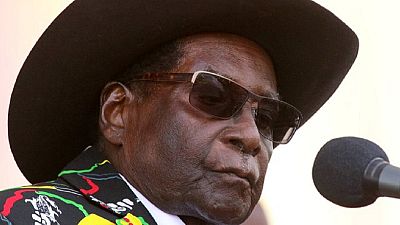 <p><strong>A retired Zimbabwean general and acolyte of ex-president Robert Mugabe has formed a political party to challenge President Emmerson Mnangagwa at the polls later this year, the new grouping said on Monday.</strong></p> <p>Mugabe, 94, was forced to step down last November following a de facto military coup. Sources close to the former leader say he is bitter over his departure after 37 years in office and has given his support to the New Patriotic Front (<span class="caps">NFP</span>) party.</p> <p>Ambrose Mutinhiri, a veteran of Zimbabwe’s 1970s independence war, quit the ruling <span class="caps">ZANU</span>-PF party and gave up his parliamentary seat last Friday, then met Mugabe on Sunday to brief him about the latest developments, an <span class="caps">NPF</span> statement said.</p> <blockquote class="twitter-tweet" data-lang="en"><p lang="en" dir="ltr">A new Zim political party is born<br /> <br /> “President Mugabe congratulated Cde Mutinhiri for taking a bold move and said <a href="https://twitter.com/hashtag/Zimbabwe?src=hash&ref_src=twsrc%5Etfw">#Zimbabwe</a> needed men and women of principle who should fight to preserve the legacy of the liberation struggle “<br /> Full National Patriotic Front statement <br /> ?? <a href="https://t.co/x1Q3UouVeI">pic.twitter.com/x1Q3UouVeI</a></p>— Trevor Ncube (@TrevorNcube) <a href="https://twitter.com/TrevorNcube/status/970658260964474880?ref_src=twsrc%5Etfw">March 5, 2018</a></blockquote> <script async src="https://platform.twitter.com/widgets.js" charset="utf-8"></script> <p>The <span class="caps">NPF</span> said it was formed by <span class="caps">ZANU</span>-PF members and Zimbabweans“outraged by the unconstitutional and humiliating manner in which President Mugabe was criminally ousted from leadership … by real criminals who have shamefully damaged Zimbabwe’s fledgling democracy”.</p> <p>Mugabe’s policies are blamed by many for the decline of Zimbabwe from breadbasket to basket case, with unemployment above 80 percent, dilapidated public infrastructure and severe shortages of hard currency that spawned hyper-inflation.</p> <p>Mnangagwa said in January Zimbabwe would hold transparent elections by July and he would respect the result if the opposition won – a pledge crucial to unlocking urgently needed financial assistance and repairing relations with Western powers and international financial institutions.</p> <h3>A divided opposition, a happy Mnangagwa</h3> <p>On Sunday, Mnangagwa surprised many when he send a congratulatory tweet to Nelson Chamisa of the Movement for Democratic Change (<span class="caps">MDC</span>- T) party upon his being endorsed as the opposition coalition candidate in the upcoming presidential election.</p> <blockquote class="twitter-tweet" data-lang="en"><p lang="en" dir="ltr">I would like to congratulate Nelson Chamisa as he takes over the leadership of the <span class="caps">MDC</span>. We look forward to a competitive, peaceful and positive election campaign, providing the people of Zimbabwe with a clear and democratic choice.</p>— President of Zimbabwe (@edmnangagwa) <a href="https://twitter.com/edmnangagwa/status/970262011681607682?ref_src=twsrc%5Etfw">March 4, 2018</a></blockquote> <script async src="https://platform.twitter.com/widgets.js" charset="utf-8"></script> <p>The divisions that have rocked the opposition since the death of veteran politician and former prime minister Morgan Tsvangirai might indeed benefit the ruling <span class="caps">ZANU</span> – PF party.</p> <p>Chamisa is being challenged for the leadership of the <span class="caps">MDC</span> – T party by the vice president of the party Dr. Thokozani Khuphe who was elected to the poition by the party’s congress in 2014.</p> <p>She insists that she is the legitimate leader of the party since Chamisa was appointed by the deceased party president, while she was elected by the party’s congress.</p> <p>Chamisa, whose supporters have been accused of meting out violence upon Khupe and her supporters in the recent past, reached out on Twitter, saying ‘what binds us together is far greater than wahat seeks to set us apart’.</p> <blockquote class="twitter-tweet" data-lang="en"><p lang="en" dir="ltr">VP Khupe is more than a VP; she’s a Cde, a sister and a friend to our <span class="caps">MDC</span>-T family. We’ve hoped, fought and cried together in pursuit of freedom.& a better Zimbabwe.What binds us together is far greater than the little that seeks to set us apart.</p>— nelson chamisa (@nelsonchamisa) <a href="https://twitter.com/nelsonchamisa/status/970564748277354496?ref_src=twsrc%5Etfw">March 5, 2018</a></blockquote> <script async src="https://platform.twitter.com/widgets.js" charset="utf-8"></script> <p>Whether the opposition will eventually set aside their differences and put together a united front against the ruling party remains to be seen.</p> <h3>Challenging the legality of the November ‘coup’</h3> <p>The new opposition player, <span class="caps">NPF</span> has on its part said it would soon challenge the legality of Mnangagwa’s government at the Constitutional Court.</p> <p>The High Court ruled in November that the military intervention was lawful, as it halted a bid by people in his entourage to take over his duties, and African and Western countries have since accepted Mnangagwa’s presidency.</p> <p>Mutinhiri, an ethnic Zezuru like Mugabe, has no known political base. He joins the ranks of other opposition political parties like the Movement for Democratic Change, whose founding president Morgan Tsvangirai died from cancer last month, and Joice Mujuru, a former Mugabe deputy.</p> <p>The state-owned Herald newspaper, which reflects government thinking, asserted that Mutinhiri was a stalking horse for Mugabe, his wife Grace and the vanquished <span class="caps">ZANU</span>-PF G40 group that had opposed Mnangagwa’s political rise.</p> <p>It was Grace’s tilt at power that triggered the military intervention in November.</p> <p>Quoting an unnamed government source, the Herald said Mugabe and his wife were also anxious about their investments, including a dairy firm and several farms.</p> <p>“Essentially, what it means is it’s the former president who is trying to stage a‘second coming’ behind the person of the dutiful and beholden Ambrose Mutinhiri,” the source was quoted by the Herald as saying.</p>