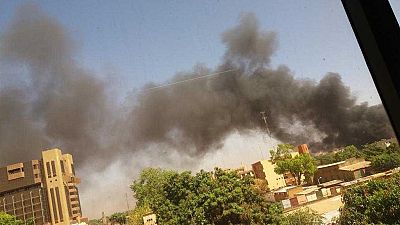 An explosion rocked Burkina Faso’s army headquarters in the capital Ouagadougou on Friday and black smoke could be seen billowing above, a Reuters witness said.

It was not immediately clear what caused the blast. But a witness at the scene told Reuters that masked gunmen with backpacks attacked the army headquarters after the explosion.

A Reuters witness said other smaller explosions came from the headquarters after a first larger blast and that security forces were converging on the scene.

The French ambassador to Burkina Faso tweeted a warning to the citizens in the capital.

The French Embassy is located near the army headquarters which were attacked by masked gunmen following the initial explosion.

The United States embassy in the capital equally warned its citizens.

The country’s police issued an alert on its Facebook pages warning residents in the capital to stay away from the affected areas.

On social media, many shared pictures of the army headquarters building with smoke rising from it.

#BurkinaFaso: Obviously a very serious situation, view of the site of the attack from an area not to distant, heavy plume of smoke rising, with previous attacks in mind not excluding suicide bombers pic.twitter.com/iqLlR1Zx0Y

Burkina Faso, like other countries in West Africa, has been targeted sporadically by jihadist groups operating across Africa’s Sahel region.

Suspected jihadists killed at least 18 people last August during a raid on a restaurant in Ouagadougou and militants have targeted Burkinabe security forces along its remote northern border region with Mali.

Al Qaeda in the Islamic Maghreb (AQIM) claimed responsibility for an attack on a restaurant and hotel in Ouagadougou in January 2016 in which 30 people were killed.

Five regional countries launched a new taskforce last year to tackle Islamist militants in the zone, to which international donors have committed a half-billion dollars.