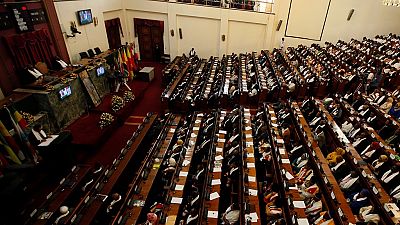 Ethiopia’s Council of Ministers imposed a six-month state or emergency (SoE) on February 16, 2018. By law, the measure needs parliamentary ratification in two weeks hence lawmakers have been summoned for that reason.

The SoE has proven to be unpopular among the people and to some extent the diplomatic community. People especially in the Oromia region have defied the rule and held gatherings leading to clashes and deaths in some cases.

The United States said it ‘strongly disagreed’ with it whiles the European Union said political reforms did not require emergency rule, but rather an open democratic space.

The Constitution of the country requires all of you to be governed by the Constitution, the will of the people, and your conscience. In deliberating on this state of emergency proclamation, it is essential that you pay full account to the human rights of the people of Ethiopia.

Addis Ababa has insisted that the measure was to curb spreading violence across the country. The Foreign Minister is on record to have said it could be revoked by a new Prime Minister. Ethiopia is awaiting a successor to Hailemariam Desalegn who resigned a day before the SoE was declared.

Amnesty International, a global rights group is advocating that lawmakers should put human rights at the heart of their deliberations on whether or not to ratify the emergency rule.

In an open letter to MPs, Secretary General of Amnesty International Salil Shetty said, “I have noted with concern the recent escalation, in gravity and magnitude, of human rights violations in Ethiopia, especially in Amhara, Oromia and Somali Regional States of Ethiopia.

“Some aspects of the current state of emergency proclamation tabled before you violate international human rights law obligations that Ethiopia is bound to respect.”

“The Constitution of the country requires all of you to be governed by the Constitution, the will of the people, and your conscience. In deliberating on this state of emergency proclamation, it is essential that you pay full account to the human rights of the people of Ethiopia,” Shetty said.

Amnesty is on record to have documented widespread abuse during the last SOE that was imposed in October 2016 at the height of the Oromo protests. It was extended by four months after its initial expiration in April and was finally lifted in August 2017.

Below is the full letter:

CONCERNS OVER THE STATE OF EMERGENCY DECLARATION

I am writing this open letter to you at this critical time in Ethiopia when you are about to deliberate and vote on the State of Emergency Proclamation which the Council of Ministers of the Federal Democratic Republic of Ethiopia passed on 16 February 2018 following the announcement of resignation of Prime Minister Hailemariam Dessalegn.

As you are all well aware, if adopted, this Proclamation will initiate a state of emergency in the country for the second time in less than two years. In October 2016, this House adopted a State of Emergency Proclamation (2016) following a year-long period of protests in Oromia and Amhara Regional States of Ethiopia, which was only lifted on 4 August 2017.

During the 10-month period of this state of emergency, Amnesty International documented widespread human rights violations, including torture and other ill-treatment, arbitrary arrests and detentions, as well as patterns of denial of access to justice.

The heightened political tension and the ongoing protests in the country underline the need for greater space for civic engagement and guarantees for full exercise of human rights, rather than less.

Further constriction of the limited civic and political space through another state of emergency may exacerbate the current crisis, leading to more human rights violations. The state of emergency also risks undermining the recent human rights gains achieved by the releases of thousands of prisoners of conscience, including prominent journalists and opposition political party leaders.

I am calling upon all of you, as members of the House of Peoples’ Representatives (HPR),to refrain from adopting the State of Emergency Proclamation without clear amendments to ensure that the Proclamation guarantees all powers or restrictions imposed under the emergency, which involve derogations from the state’s normal human rights obligations, including all specific measures taken under such powers or imposing such restrictions, are limited to what is strictly required by the exigencies of the situation which has given rise to this Declaration.

I also ask you to ensure that the State of Emergency Proclamation and the Directive do not further constrict the freedoms of expression, assembly and association in Ethiopia; and to ensure that the provisions of the State of Emergency Proclamation and its enforcement Directive comply with international and regional human rights law and standards reflected in treaties Ethiopia has ratified and norms of customary international law.

Article 54(4) of the Federal Democratic Republic of Ethiopia’s Constitution requires all of you to be governed by the Constitution, the will of the people, and your conscience. In particular, in deliberating on this Proclamation it is essential that you pay full account to the human rights of the people of Ethiopia.

Amnesty International stands ready to engage with and work with the Government and the HPR to support the improvement of the human rights situation in Ethiopia.