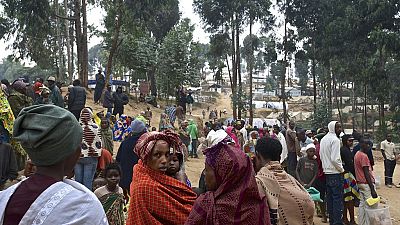 At least five Congolese refugees were killed and 20 injured at a camp in Rwanda when a protest over a cut in food rations turned violent, Rwandan police said on Friday. Seven policemen were also injured.

Around 3,000 refugees had camped outside United Nations offices at the camp since Tuesday. On Thursday, police tried to disperse them using teargas, police spokesman Theos Badege told state radio.

“We used force … yesterday afternoon after warning that security forces would be used,” he said.

“They started pelting stones, pieces of metal and in that 20 refugees were injured and seven police officers. Five of the refugees died.”

Fifteen refugees were arrested, the police said on their Twitter account. They said there were about 500 protesters, while UNHCR put the figure at about 700.

The refugees from neighbouring Democratic Republic of Congo had left their camp in Kiziba and walked 15 km (10 miles) to Karongi, in western Rwanda, to protest against a 25 percent cut implemented last month in rations provided by the U.N. refugee agency (UNHCR). The camp houses 17,000 Congolese.

“We regret that our continued appeals for maintaining calm and restraint were not considered. This tragedy should have been avoided, and disproportionate use of force against desperate refugees is not acceptable,” Cécile Pouilly, UNHCR spokeswoman, said in a statement.

“UNHCR calls on authorities to refrain from further use of force and to investigate the circumstances of this tragic incident.”

Rwanda hosts about 174,000 refugees, including 57,000 people from neighbouring Burundi who fled violence in 2015. Most of the rest fled the Democratic Republic of Congo during bouts of instability there over the past 20 years.
In January, UNHCR said it was cutting rations due to funding shortages.

It said on Thursday that its funding appeal of 2018 for Rwanda of $98.8 million was only 2 percent funded, and the World Food Programme had warned of more cuts if its monthly requirements of $2.5 million were not met.