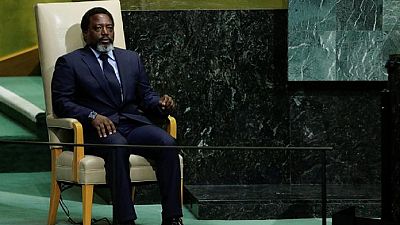 Botswana has urged the president of the Democratic Republic of Congo (DRC), Joseph Kabila, to step down.

In a press release titled ‘Refusal by some leaders to hand over power’, the ministry of international affairs said the ‘worsening humanitarian situation’ in DRC is fuelled by the fact that ‘its leader has persistently delayed holding elections, and has lost control over the security of his country’.

PRESS RELEASE -REFUSAL BY SOME LEADERS TO HAND OVER POWER pic.twitter.com/fCZ2rTIIDK

The statemnt concludes by urging the international community to put pressure on the leadership of DRC to relinquish power and pave way for the ushering in of a new political dispensation.

Government troops have clashed with opposition supporters following the refusal of President Kabila to leave office.

He took power in 2001 after his father’s assassination and had been expected to step down in 2016 after the two terms provided for in the constitution.

He has however stayed on citing logistical challenges that have prevented the organisation of elections that would usher in a new president.

A new date of December 23, 2018 has been set to hold the delayed poll but opposition supporters want Kabila to declare that he will not seek to change the country’s constitution to enable him seek another term in office.