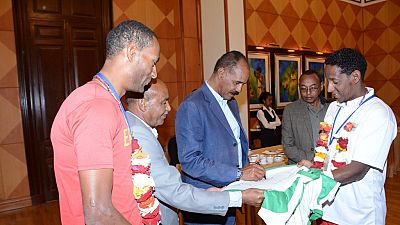 Eritrea’s cycling team returned home to a rapturous reception after emerging tops at the just ended 2018 Africa championship in Rwanda.

The winning team were hosted at the presidential palace in the capital Asmara where president Isaias Afwerki congratulated the team for their exploits. Each rider was awarded $1,000 the cycling federation added.

The streets of Asmara were flooded with citizens to welcome the cycling team who were seated on car doors receiving the cheers with display of their medals and trophies.

Information Minister Yemane Meskel added that a concert was held for the team at the Bahti Meskerem Square.

#TeamEritrea receive a Hero’s welcome on his return to Eritrea after winning the afroroadchamps
??? pic.twitter.com/z7qKYUHnKd

At the end of the 2018 African Continental Road Championship, Eritrea topped the medal table with a total of 20 medals. 10 golds, five silver and five bronze.

Ethiopia, Rwanda and Algeria completed the top four on the table with thirteen, ten and two medals respectively. Burundi and Namibia also got a medal each.