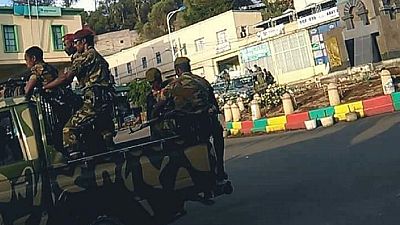 The sit-down strike in the city of Gondar in Ethiopia’s northern Amhara regional state entered its third day. The protest is against government’s declaration of a national state of emergency late last week.

Reports from local portals indicate that the strike has left the city deserted for the third consecutive day. Shops have not opened, transport is absent and some government offices remain closed.

Armed military patrols have been sighted on the streets. It is still not known who called for the sit-down strike.

The city has pressed ahead with the strike despite it being classed a prohibited act under the state of emergency declared late last week. Minister of defense Siraj Fegessa stated that it will be in place for six months.

Amhara region along with Oromia were the main centers of spreading anti-government protests that led to the imposition of the last state of emergency in October 2016. It was lifted in August 2017 and followed by a series of security headaches.

Addis Ababa said the latest state of emergency is aimed at curbing rising insecurity across the country following the release of hundreds of political prisoners. Government said the move, part of wider reforms, was aimed at fostering national unity.