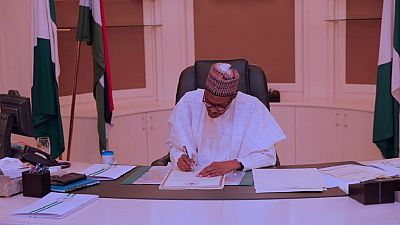 Nigeria’s president has issued directives to government agencies to give preference to Nigerian nationals and companies when recruiting and procuring respectively.

The president who, during his campaign, vowed to end the country’s dependence on oil exports, signed an executive order aimed at boosting the local production of goods and creating jobs in the west African country.

In 2015, months after Buhari came to power in May of that year, the central bank restricted access to foreign currency to import certain goods in a bid to stimulate local manufacturing.

The executive order also prohibits the ministry of interior from giving visas to foreign workers whose skills are readily available in Nigeria.

The president has now “ordered that all ‘procuring authorities shall give preference to Nigerian companies and firms in the award of contracts, in line with the Public Procurement Act 2007’, said the presidency in a statement circulated on Monday.

“The executive order also prohibits the ministry of interior from giving visas to foreign workers whose skills are readily available in Nigeria,” added the statement.

The order states that consideration will only be given to a foreign professional, “where it is certified by the appropriate authority that such expertise is not available in Nigeria.”

Around four out of every 10 people in the country’s workforce were unemployed or underemployed by the end of September, according to data released by the statistics office in December.

The country, which has Africa’s largest population and biggest economy, in 2016 fell into its a recession largely caused by low oil prices and militant attacks on energy facilities in the Niger Delta region.

It emerged from recession in the second quarter of 2017, largely fuelled by higher oil prices and non-oil sectors of agriculture, finance and insurance.