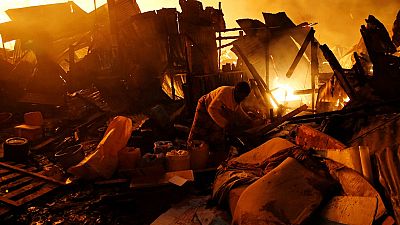 Kenyans on social media have lashed out at the government over the loss of lives and property, following a fire that gutted a slum in the capital, Nairobi.

Media reports say about four people were killed in the Sunday fire that has also left at least 6,000 people homeless.

While the Deputy President of the country, William Ruto has since pledged that government will spend up to $490,000 to help victims of the fire, it is the emergency response by the authorities when the fire was reported that irked many Kenyans.

The fire incident at Kijiji, Langata is regrettable. The NYS will aid the reconstruction of houses, establish access roads, improve drainage and facilitate a return to normalcy. Rapid response and preparedness are a must during emergencies to avoid loss of lives and property. pic.twitter.com/BjU0lj0VQi

A news report by local media house, KTN News, quoting the area member of parliament saying ‘the response time was quick but unfortunately the fire fighting engines didn’t have water’ kicked off the bashing of the government.

Nixon Korir, MP Lang’ata: “The response time was quick but unfortunately the fire fighting engines didn’t have water. We can have the best equipment but without water there is nothing we can do…” KTNNews #LangataFire #Checkpoint pic.twitter.com/apFY70ES4j

They responded quickly without water, this makes me mad, kwani walikuja kuota moto. Fire fighting engines without water are as good as not having them

Users quickly pointed out that government always has water to disperse crowds of opposition political rallies and also referred to a launch of fire fighting equipment by the government a few months ago.

PR Launch: “We’ve got enough equipment and capacity to serve all 17 constituencies.”

4 months later at #LangataFire: There was no water in our fire trucks….. pic.twitter.com/Zp1Ud6BmRo

Media reports from Kenya say the governor of Nairobi has responded to the criticism and sent two officials in charge of the fire department on leave.

NAIROBI FIRE Department director and his deputy sent on compulsory leave by Governor Sonko for poor coordination while responding to #KijijiFire pic.twitter.com/7nmWVXzs0J