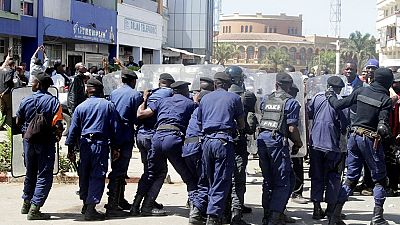 At least five people were killed when Congolese security forces fired tear gas and live bullets to disperse a protest against President Joseph Kabila organised by the Catholic church on Sunday, a local watchdog said.

Seventeen other people were wounded, it said.

A Reuters witness saw police and paramilitary troops fire volleys of tear gas and shoot into the air outside the Notre Dame cathedral in the capital Kinshasa. At least six people were lightly wounded when they were struck with flying tear gas canisters, he said.

Anger has been building against Kabila since he refused to step down at the end of his mandate in December 2016, triggering street protests in which scores have been killed in Kinshasa, and emboldening a plethora of armed rebel groups upcountry.

This has stoked fears that the vast, mineral-rich Democratic Republic of Congo could slide back into the wars that killed millions in the 1990s, mostly from hunger and disease.

“I marched today for a simple reason: I want to bring up my children in a country that respects human rights,” protester Pascal Kabeya, a 40-year-old market trader, told Reuters where a few hundred had gathered in a suburb of Kinshasa.

Georges Kapiamba, president of Congolese Association for Access to Justice (ACAJ) put the initial toll at three dead and 17 seriously wounded. A police spokesman did not immediately respond to a request for comment.

The violence echoed that of New Year’s Eve, when Congolese forces killed at least seven people in the capital during a protest by Catholic activists..

Under a deal mediated between the Catholic church and Kabila’s opponents, the president was to step down at the end of last year, paving the way for an election early this year. But he reneged on the deal and the poll has been repeatedly delayed — it is currently loosely scheduled for the end of 2018.

The Roman Catholic Church has since emerged as a harness for opposition to Kabila’s efforts to stay in power with no mandate, while his political opposition remains feeble and fragmented.

Kabila, who has been president his father was killed in office in 2001, blames the electoral delays on the logistics of voter registration.