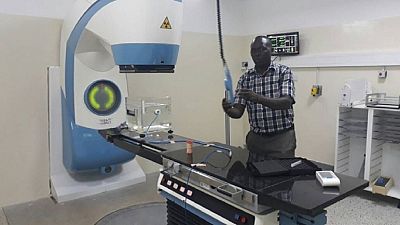 Uganda today inaugurated a new radiotherapy machine to resume essential treatment services for cancer patients after the country’s only previous such equipment broke down in 2016. The International Atomic Energy Agency (IAEA) provided technical and financial support for the re-establishment of radiotherapy services in Uganda.

Responding to a Government request, the IAEA helped buy the new equipment and ensure its safe installation at the Uganda Cancer Institute in the capital Kampala. IAEA assistance totalling more than € 500,000 included the decommissioning of the old radiotherapy machine and the purchase of a new one on a cost-sharing basis with the Government. The IAEA also provided advice in adapting the existing facility to accommodate the new machine and training for medical staff.

“The restoration of life-saving cancer treatment services in Uganda is a major cause for celebration,” IAEA Director General Yukiya Amano said at the inauguration event in Kampala, attended also by senior Ugandan officials. “The IAEA is proud to have been your partner.”

The new Cobalt-60 machine offers patients more precise and efficient treatment. It will complement the existing brachytherapy service at the Uganda Cancer Institute to offer treatment to women suffering from gynaecological cancer.

“The use of radiotherapy in Africa is slowly gaining momentum,” said Dr Jackson Orem, Director of the Uganda Cancer Institute. “The breakdown of the radiotherapy machine in Uganda is an example of the challenges to be considered while expanding access to treatment. However, the collaborative handling of this crisis with the IAEA and the lessons learnt have shown how to turn a misfortune into an opportunity.”

Like many low- and middle-income countries, Uganda faces a growing burden of chronic diseases such as cancer. The International Agency for Research on Cancer estimates that the East African nation has nearly 30,000 new cancer cases per year. The number of annual cancer-related deaths exceeds 20,000. Breast and gynaecological cancers are responsible for over 40 per cent of all female cases, while prostate cancer accounts for 20 per cent of male occurrences. These types of cancers can effectively be treated with radiotherapy.

“A key role of the IAEA is to help countries use nuclear science and technology to support their socio-economic development in areas where nuclear applications have a comparative advantage,” Amano said. “We have provided training to many Ugandan medical professionals, and appreciate the effective collaboration between the Government and the IAEA in cancer control.”

Amano attended the inauguration during a 17-20 January visit to Uganda, where he also met with President Yoweri Museveni and Prime Minister Ruhakana Rugunda to discuss IAEA Technical Cooperation projects and other areas of mutual interest.