Militant group Boko Haram released a video on Monday purportedly showing some of the remaining girls who were kidnapped from the northeast Nigerian town of Chibok in 2014.

Of the some 270 girls who were originally abducted from their school, about 60 escaped soon afterwards and others have since been released after mediation. Over 100 others are still believed to be in captivity.

A group of about 12 girls, some of whom are carrying babies, are seen in the 21-minute video.

“We are the Chibok girls. We are the ones you are crying about for us to come back. By the grace of Allah, we are never coming back,” said one of the girls. Reuters was unable to independently verify the claim that the girls were among those kidnapped in Chibok.

Abubakar Shekau – the leader of one of the group’s factions – also appears in the video, which was obtained by a U.S.-based journalism website, Sahara Reporters.

Last May, Boko Haram exchanged 82 of the girls after mediation, involving a payment to the insurgents and the release of some of the group’s imprisoned senior members. Prior to that, 24 had been released or found in 2016.

Boko Haram has killed more than 20,000 people and forced two million others to flee their homes in an insurgency that began in 2009 aimed at creating an Islamic caliphate. Aid groups say the militants have kidnapped thousands of adults and children, many of whose cases are neglected. 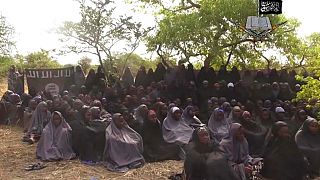