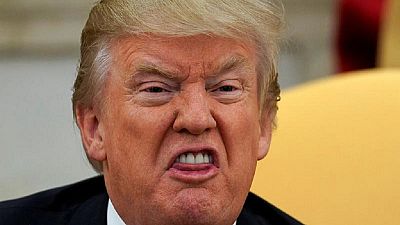 President of the United States (U.S.) Donald John Trump has reportedly made disparaging remarks about African and Haitian migrants in the U.S.

Whiles meeting a bipartisan group of Senators at the White House on Thursday, Trump questioned why the U.S would want to have immigrants from Haiti and African nations. He went on to refer to some as “shithole countries,” Reuters news agency said citing two sources familiar with the comments.

One of the sources who was briefed on the conversation said that Trump said, “Why do we want all these people from Africa here? They’re shithole countries … We should have more people from Norway.”

The second source familiar with the conversation, said Trump, who has vowed to clamp down on illegal immigration, also questioned the need for Haitians in the United States.

The word ‘shithole’ according to Wordweb is a vulgar and informal word denoting: “an unpleasant or disgusting place.”

Democratic Senator Dick Durbin and Republican Senator Lindsey Graham were at the White House to brief Trump on a newly drafted immigration bill. Other government officials were present during the conversation, the sources said.

The lawmakers were describing how certain immigration programs operate, including one to give safe haven in the United States to people from countries suffering from natural disasters or civil strife.

His comments have been widely condemned by people across the political divide but Trump tweeted about his resolve to protect all Americans by pushing forward with his immigration plans.

The Democrats seem intent on having people and drugs pour into our country from the Southern Border, risking thousands of lives in the process. It is my duty to protect the lives and safety of all Americans. We must build a Great Wall, think Merit and end Lottery & Chain. USA!

It is not the first time Trump is making a disparaging reference to Africa. He was reported late last year to have said Nigerians did not want to return to their “huts” after coming to America.

His infamous travel ban has also affected a number of African countries among others: Libya, Somalia and Sudan – Sudan is off the most recent list but has been replaced by Chad. A surprising move given that Ndjamena is an ally to the U.S. in anti-terrorism combat.

Trump’s Africa policy also remains “unclear” according to political watchers. A little over a year in office, he has spoken to barely a dozen African leaders and has yet to make a trip to the continent – he had hinted that Egypt could be his first stop.