Diamonds bigger than 100 carats found in Lesotho mine 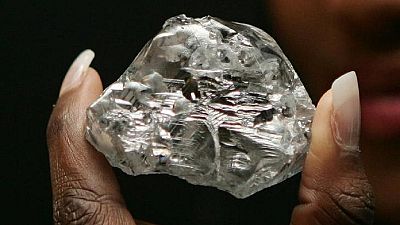 Gem Diamonds has discovered two huge diamonds, each bigger than 100 carats, at its Lesotho mine.

It unearthed the 117 carat and 110 carat D color Type IIa diamonds at the Letseng mine, Gem said in a statement on Monday. Type IIa diamonds contain very little or no nitrogen atoms and are the most expensive stones.

The company’s stock rose as much as 8.2% in London trading.

While we do not know the final value of the stones, it is likely that good-quality, type-IIa diamonds could fetch more than $25,000 per carat.

The news will be seen as extra positive for the company, following Gem’s discovery of at least seven stones bigger than 100 carats in 2017 and five in 2016.

Gem recovered a dozen diamonds bigger than 100 carats in 2015.

Still, recent finds don’t compare with the largest at Letseng, renowned for the quality and size of its stones. Gem sold a 357-carat stone for $19.3m in 2015 and in 2006 found the 603-carat Lesotho Promise.

‘‘While we do not know the final value of the stones, it is likely that good-quality, type-IIa diamonds could fetch more than $25,000 per carat.’‘

A rival mining company, Lucapa Diamond Company also announced on Monday that it had discovered 103 carat and 83 carat diamonds at its operations in Angola. The company’s biggest-ever find was a 404 carat stone that sold for $16m in 2016.

The mining sector in Lesotho contributes up to 10% of the country’s gross domestic product and unlike many countries where mineral wealth has fuelled conflict, Lesotho has managed to use proceeds from mining diamonds to spur socio-economic development.