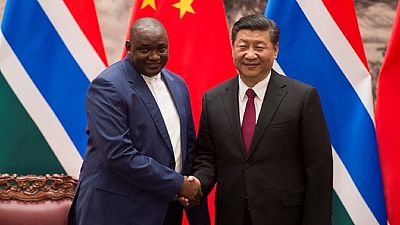 Gambian president Adama Barrow has secured the establishment of a Confucius Institute qt one of the country’s leading universities, in addition to several cooperation agreements with China in the fields of economy, trade, investment, technology, infrastructure construction and human resources development.

Barrow is on a week long state visit to China at the invitation of President Xi Jinping.

At the signing of the agreements in Beijing, Barrow committed his country to the framework on China-Africa Cooperation.

While expressing admiration for China’s achievements, Barrow said Gambia seeks to learn from China’s development experience and enhance its own capacity-building.

“It is a sign of support, a sign of giving confidence to our new administration,” Barrow told Xi.

On his part, the Chinese president underscored the importance of Gambia in upholding the One China Policy that seeks to isolate Taiwan from any form of international recognition.

“Upholding the one-China principle and the big picture of bilateral friendship, China and Gambia should understand and support each other on issues relating to core interests and major concerns, and be sincere friends and partners on an equal footing,” Xi said

Gambia severed ties with Taiwan in 2013 during the reign of President Yahaya Jammeh, but China which has a long standing ‘cold’ war with Taiwan did not resume diplomatic relations with Gambia until March 2016.

Xi said Gambia’s decision to resume diplomatic relations with China is a “correct choice,” which follows the trend of the times and serves the fundamental interests of the two countries and peoples.

Xi then expressed the interests of China in forging closer ties with Gambia.

“China is willing to increase cooperation with Gambia in security and to step up communication and coordination in international and regional affairs to contribute to peace and stability in west Africa,” Xi said.

Reiterating China’s principle of non-inteference in political affairs of its partners, Xi said ‘China is out to strengthen solidarity with developing countries, including those in Africa’.

“China’s cooperation with foreign countries is not attached to any political string. The essence of China-Africa cooperation is to combine China’s development with that of Africa to realize win-win cooperation and mutual development,” Xi said.

Chinese companies are bidding with French companies to handle the upgrade of Gambia’s Atlantic port Banjul.

The port would be one of the first major structural changes in Gambia following the end of President Yahya Jammeh’s more than 20-year rule in January.