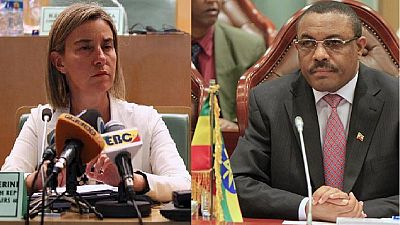 The European Union (E.U.) has officially commented on the recent security crisis in Ethiopia. The E.U. whiles expressing condolences to affected families asked the government to accept an independent probe into the deaths.

In a statement issued on Wednesday (December 20) by Foreign Affairs chief, Federica Mogherini, the E.U. asked that regional and federal security forces had to exercise restraint in the discharge of their duties.

They also reiterated the need for inclusive and broad-based dialogue in the political process in order to address grievances in a peaceful and conducive manner.

Statement by the Spokesperson on the situation in Ethiopia

Recurring reports of violence in several universities and clashes in different parts of Ethiopia are deeply worrying, in particular as regards their increasingly ethnic nature. This includes the recent incidents in Oromia-Somali regions, causing many casualties and the destruction of properties. The European Union extends its condolences to the families of the victims.

It is essential that independent investigations on all acts of violence are conducted. The setting up by Ethiopian Prime Minister Hailemariam Desalegn of a task force to investigate the most recent killings is a welcome step. All sides, including regional and federal police forces, should show restraint to ensure full protection and safety of all citizens.

The conflict resolution mechanisms enshrined in the Constitution should be activated swiftly in order to allow for a peaceful settlement of the issues. We remain convinced that only an inclusive political dialogue with all stakeholders will address the grievances of the population in a peaceful and constructive manner.

The security situation in Ethiopia is a mix of anti-government sentiment on one hand, ethnic clashes affecting two major regions and a deadly turn of events across some universities in the Horn of Africa country.

Most universities affected by serial deaths of students have closed down due to a lack of conducive atmosphere for studies. The government has said that the deaths were politically inclined and that it was doing everything possible to remedy the situation.

Then last week, sixteen people were reportedly shot in the town of Chelenko in the Oromia region. The regional communications chief blamed it on federal security forces who opened fire on protesters unhappy about the killing of a resident. The government says it has opened a probe.

Then there is the border tensions between the Oromia and Ethiopia-Somali regional states. An escalation in the age-long tension late last week led to the deaths of 61 people on both sides. Scores were also reported to have been injured, houses burnt and hundreds internally displaced.

The United States earlier this week had expressed worry at the deaths and tasked the government to remedy it.

“We are troubled and saddened by reports of violence that has resulted in deaths and injuries in the town of Chelenko and at several universities over the past two days. We extend our condolences to the families and friends of the victims.

“It is important that the Ethiopian government ensure the safety of all Ethiopian citizens, and hold accountable those responsible for violence,” the statement read in parts.