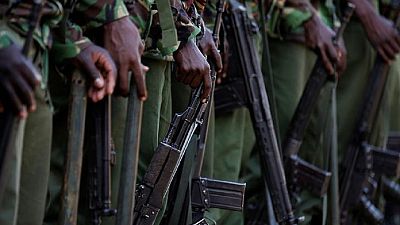 <p><strong>Kenyan police raided an Islamic school on Tuesday, arresting two teachers and taking around 100 children into protective custody in what police described as a counter-terrorism operation involving foreign law-enforcement agencies.</strong></p> <p>Police described the school in Likoni, south of the port city of Mombasa, as a centre for indoctrinating young men and children with militant ideology.</p> <p>“The place has been monitored for a long time,” said a police source who asked not to be named. The police spokesman was unavailable for comment.</p> <p>The six-year-old institution teaches Quran memorisation to Muslims at its elementary levels. Learners are later introduced to other Islamic subjects like jurisprudence or fiqh or hadith and Seera – the biography of Prophet Mohamed.</p> <p>Kenya is mostly Christian but has a large Islamic population. It is relatively free from religious tension, although it has suffered repeated deadly attacks from Somali Islamist extremists.</p> <p>A local Muslim leader confirmed the operation but said there was no evidence of any illegal activity.</p> <p>“A group of local and foreign police officers raided the madrasa (Islamic school) where the pupils were sleeping and took them with their teachers,” Sheikh Hassan Omar, a senior official in the Council of Imams and Preachers of Kenya (<span class="caps">CIPK</span>), an umbrella body for Kenya’s religious leaders, told journalists in Mombasa.</p> <p>“There are nearly 100 pupils and four madrasa teachers who have been arrested and detained at police headquarters and nobody is telling us what crime they have committed.”</p> <p>It was not immediately clear why the police and <span class="caps">CIPK</span> gave different totals for the number of teachers arrested.</p> <p>Omar said the officers asked for identification documents, including birth certificates from the children, and their teachers before they took them.</p> <p>Another police source told Reuters the operation was sparked by intelligence information that both foreign and local children were being indoctrinated in the school.</p> <p>“We have been assisted by some friends from outside with information and monitoring of this madrasa. That is normal with such cross-border criminal issues,” said another senior police officer, who also asked not to be named. </p> <p>He did say which foreign country was involved in the raid but local media report that the children are from different countries including US, UK, Canada, South Africa, Saudia Arabia, Somalia, Zambia, Uganda and Kenya.</p> <p>“They (the children) will be released one by one after we interrogate and clear them,” he said.</p> <p>Grace Ndiragu, an officer in charge of anti Human Trafficking and Child Protection Unit shed more light on the raid saying it was done following cases of mistreatment of kids.</p> <p>“We received two cases of child abuse from the parents and decided to conduct an operation.They will be interrogated and profiled before they can be released back to the family.” she at the site.</p> <p>But some parents whose children have been arrested have said the raid was unlawful and victimising.</p>