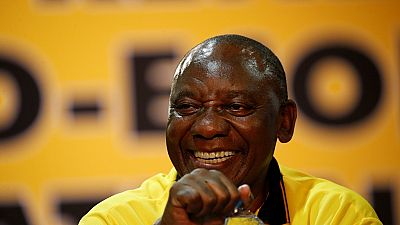 While at university, Ramaphosa became involved in student politics and joined the South African Students Organisation (SASO) and the Black People’s Convention (BPC).

He was detained in solitary confinement for eleven months in 1974 under Section 6 of the country’s Terrorism Act and was held for another six months at John Vorster Square under the same law in 1976 following the anti-apartheid unrest in Soweto.

After his release, he became a law clerk for a Johannesburg firm of attorneys and continued with his studies through correspondence with the University of South Africa (UNISA), where he obtained his first degree in 1981.

He was elected as the first General Secretary of the Congress of South African Trade Union (COSATU), a position he held until he resigned in June 1991, following his election as Secretary General of the African National Congress (ANC).

Following the first democratic elections in 1994, Ramaphosa became a member of parliament; he was elected the chairperson of its Constitutional Assembly on 24 May 1994

After he lost the race to become President of South Africa to Thabo Mbeki, he resigned from his political positions in January 1997 and moved to the private sector. He is said to be one of the richest men in the country with an estimated worth of about $450m.

Ramaphosa was appointed Deputy President by Jacob Zuma on May 25, 2014 and was made Leader of Government Business in the National Assembly in terms of section 91 of the Constitution.

In July 2014, Ramaphosa called for unity in the country, following calls by Julius Malema to scrap the singing of the Afrikaans portion of the national anthem.

He was elected as President of the African National Congress (ANC) at the ANC National Conference in Nasrec, South of Johannesburg in December 2017. He will be the ANC’s candidate in presidential elections slated for 2019 after the term of his boss Jacob Zuma expires.

The ANC has been the dominant political force in post-apartheid South Africa. Ramaphosa is all but set to become its fifth president following after Nelson Mandela, Thabo Mbeki, Kgalema Motlanthe and Jacob Zuma.

He is a prominent businessman who has held notable ownership in companies like McDonald’s South Africa, chairperson of the board of MTN and member of the board for a giant mining firm, Lonmin.