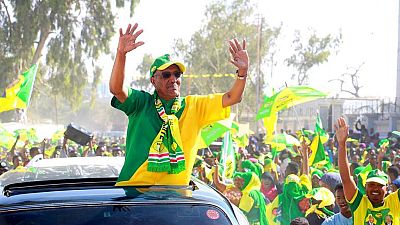 <p><strong>The self-declared republic of Somaliland has sworn in its fifth president, Muse Bihi Abdi.</strong></p> <p>There was excitement and optimism on social media as citizens relished the peaceful transition of power and wished their new president a fruitful five year term.</p> <p>Abdi, a retired pilot was <a href="http://www.africanews.com/2017/11/21/somaliland-ruling-party-candidate-wins-nov-13-polls-media-reports/">declared winner</a> of the tightly contested November 13 polls, having polled 55.% of the votes cast.</p> <p>While the election historically employed iris technology to avert electoral fraud, the opposition still cried foul alleging fraud.</p> <p>At today’s inauguration, the president wasted no time in addressing his dissatisfied opponents.</p> <p>“I am ready and working on solving all the election-related disputes and to cool down all the brothers who have grievances,” he said during the inauguration ceremony, which was broadcast live by privately-owned Horn Cable TV.</p> <p>“If you have grievances I urge you to come to the table.”</p> <blockquote class="twitter-tweet" data-lang="en"><p lang="en" dir="ltr">After Nov 13 elections; a peaceful transfer of power took place today in <a href="https://twitter.com/hashtag/Somaliland?src=hash&ref_src=twsrc%5Etfw">#Somaliland</a> from former President Ahmed Silanyo to newly elected President Muse Bixi. God bless Somaliland. That <a href="https://t.co/9b2rrMxicR">pic.twitter.com/9b2rrMxicR</a></p>— Rashid Garuf (@somalilandusa) <a href="https://twitter.com/somalilandusa/status/940976592158969856?ref_src=twsrc%5Etfw">December 13, 2017</a></blockquote> <script async src="https://platform.twitter.com/widgets.js" charset="utf-8"></script> <p>In addition to reaching out to the electorate that didn’t vote for him, President Abdi will have to deal with high unemployment rates especially among the youth and also continue the struggle to get international recognition for Somaliland.</p> <p>Somaliland declared unilateral independence from Somalia on May 18, 1991. It has been under pressure to hold talks with Somalia which have so far been futile.</p> <p>Described as the most peaceful state in the Horn of Africa region, Somaliland can boast of an army, its own currency and legal system. The territory has been experiencing stability and economic prosperity. It has been influential in the fight against piracy and terrorism in the Horn of Africa.</p> <p>26 years of diplomatic isolation has made it difficult for Somaliland to have access to loans from the World Bank and the International Monetary Fund. It is regarded as the autonomous region of Somalia and not a sovereign state.</p> <p>Somaliland has held successful presidential elections in 2003 and 2010 including a parliamentary election in 2005. The 2017 election is touted to be the first incident-free polls to be held in the Horn of Africa in many years.</p>