AU to help evacuate 15,000 migrants from Libya this year 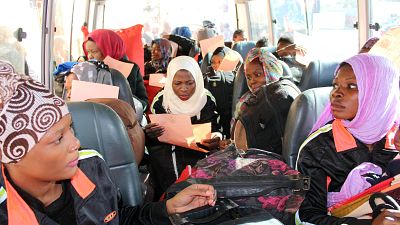 AU’s deputy chairman said Tuesday that the organization and it’s member states will repatriate more than 15,000 migrants stranded in Libya by the end of the year.

According to media sources, between 400,000 and 700,000 African migrants are in dozens of camps across Libya, often under inhumane conditions, AU Commission chairman Moussa Faki Mahamat told a summit of European and African leaders last week. The International Organization for Migration says more than 423,000 migrants have been identified in the chaotic North African country, most of them from impoverished countries across sub-Saharan Africa.

Libya’s modern-day slavery came to international attention after the CNN footage showed migrants being auctioned off for as little as $400. Thousands of migrants make their way to Libya in hopes of eventually reaching Europe via the Mediterranean, often facing desertion and inhumane treatment by smugglers.

During the EU-Africa Summit in Abidjan last week, African and European leaders drew up an emergency evacuation plan for migrants, agreeing to airlift at least 3,800 stranded in one of more than 40 detention centers in Libya. Morocco, France, and Germany offered to provide their air carriers.

Europe has struggled to stem the flow of tens of thousands of Africans making the dangerous crossing of the Mediterranean. But many Africans still make the journey, risking death and abuse, saying high unemployment and climate change leave them little choice.

Amnesty International has criticized Europe, saying its primary aim is to close the Mediterranean route and leave hundreds of thousands of migrants trapped in Libya and facing horrific abuses.