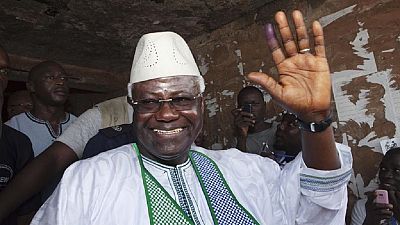 Sierra Leone president Ernest Bai Koroma has relieved Foreign Affairs minister Dr Samura Kamara of his post as the latter prepares to run for president on the ticket of the ruling party.

Kamara was chosen as the All People’s Congress (APC) as its candidate for presidential elections due next year. His boss, President Koroma came to power in 2007 under the aegis of the APC before winning a second term in November 2012.

Koroma in what has been described as a mini cabinet reshuffle, which could be the last, also appointed a former finance minister Dr Kelfala Marah to replace candidate Kamara as the country’s new chief diplomat.

He also appointed a new information minister in the person of Alpha Kanu, who has held different ministerial portfolios in the past.

According to a top Sierra Leonean journalist, Umaru Fofana, “Both men (Marah and Kanu) ran to succeed the president but were left in the cold during the process of selecting the ruling party’s standard bearer. The eventual candidate is the outgoing foreign minister, Dr Samura Kamara.”

“Two other presidential aspirants have also been brought in as presidential advisers, Dr Joseph Sam Sesay and Alimamy P Koroma. So has the former information minister Mohamed Bangura. Alfred Palo Conteh is back as defense minister.

Fofana adds that many people in reacting to the reshuffle have dismissed it and labeled it a case of old wine in a new bottle. Others aver that it’s an attempt by the ruling party “to calm the choppy political waters following the controversial national delegates’ conference of the ruling party which left a groundswell of discontent.”

The APC will come up against the main opposition Sierra Leone Peoples Party (SLPP). They have picked a retired brigadier, Julius Maada Bio as their candidate as it aims to return to power after a decade in opposition.