Egyptians save money through buying of damaged second-hand vehicles 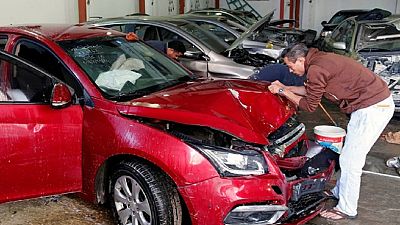 In Egypt’s trying economic times, one man’s trade in crash-damaged cars has boomed. Egyptians across the country are saving money and buying damaged second-hand vehicles at less than half the price of brand new models.

Mohamed Shaheen, who has traded in damaged cars for over two decades, says that many Egyptians are skipping using dealerships and coming to his workshop, attracted by cheaper prices.

“I buy these cars that have been in road accidents, and sell them just as they are. I go to dealerships, check what cars they have, they may have 10 or 20 cars, so I buy them. Then people come from villages, or from Cairo, and I sell them the car as it is,” Shaheen said.

I buy these cars that have been in road accidents, and sell them just as they are. I go to dealerships, check what cars they have, they may have 10 or 20 cars, so I buy them.

The central bank abandoned a peg of 8.8 Egyptian pounds to the U.S. dollar in November 2016, hoping to pull foreign currency back into the official banking system.

In addition, inflation soared after the government cut fuel and energy subsidies. The cuts were a condition of a $12 billion, three-year loan programme agreed with the IMF, which included subsidy cuts, tax increases and looser capital controls.
Meanwhile, Economists say the mosque attack in Egypt’s Sinai may only strengthen the view that the country needs continued IMF support as agreed a year ago and the economy is likely to quickly shake off any negative repercussions.
Gunmen carrying the flag of Islamic State killed more than 300 worshippers in the attack on the mosque, the worst such attack by militants in Egypt’s modern history.

Tourists and investors seem unlikely to be much deterred by the attack, which took place in an isolated spot far away from Egypt’s main tourist resorts and economic centres.

“It won’t have an impact,” said Reham Eldesoki, a senior economist at regional investment bank Arqaam Capital. “It’s so far away from South Sinai. There have already been other terrorist attacks in northern Sinai and they haven’t impacted European tourism or any other sort of tourism.”