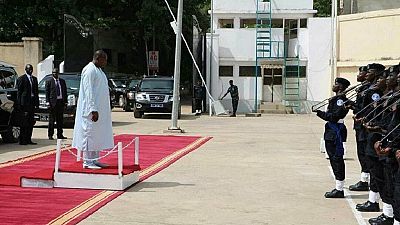 A military court in Gambia on Monday accused ten soldiers of treason and mutiny in a plot to overthrow the country’s new government, while two others are also being tried for aiding a sergeant to escape.

Some elements of the armed forces remain loyal to former president Yahya Jammeh, who was overthrown in January after 22 years in power. But the evidence of a coup plot against the new government has only just emerged.

The ten soldiers are alleged to have “prepared or attempted to overthrow the democratically elected government of The Gambia by illegal means which is a violation of the law”, according to a court document seen by AFP.

The soldiers, who had been arrested in July, were detained without trial, beyond the statutory three-day custody period.

Two soldiers who are standing trial for less serious offenses are accused of helping a soldier to escape without informing their superiors.

After more than 22 years as the leader of the Gambia, Yahya Jammeh fled the country into exile in late January after refusing to accept defeat in the presidential election in December 2016 against Adama Barrow.

He finally agreed to leave power and the country when he was threatened with a military intervention by the Economic Community of West African States (ECOWAS) and a final Guinean-Mauritanian mediation.

President Adama Barrow has shown his willingness to break with the arbitrariness and human rights violations of the regime of his predecessor, who lives in exile in Equatorial Guinea.

On November 20, a Gambian judge ordered the replacement of the lawyers of former Gambian intelligence chief Yankuba Badjie, who is on trial for the 2016 murder of an opponent of the then president, Yahya Jammeh.