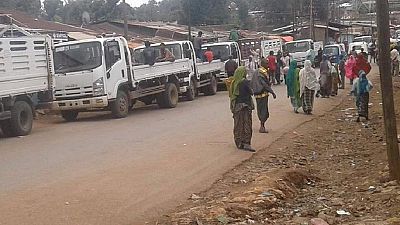 Ethiopia says more than 20 people have been killed in a renewed clash between the Oromos and Somali ethnic group in Eastern Ethiopia.

Government spokerperson, Negeri Lenco said 98 people were arrested in the Oromia region and five arrested in the Somali region. A long-standing border dispute and an increased military presence in the regions triggered the recent fighting, according to the Associated Press.

Officials agreed to reconcile differences in April and troops were deployed to major roads, but clashes have continued. Fighting in September killed several dozen people and displaced tens of thousands of Oromos.

“People were fighting with whatever means they have against the Somali Special Police,”

“People were fighting with whatever means they have against the Somali Special Police,” Galagalo Daalacha, an ethnic Oromo, told The Associated Press of Friday’s fighting in the Borana area. “Many people fled to the forest after troops entered the area.”

Heavy clashes along the Oromia-Somali boundary in September spilled into ethnic violence which left scores of people dead and tens of thousands displaced.

Oromia and Somali regional states have been locked in a dispute over the delineation of their common boundary for almost two decades.

A referendum in October 2004 was supposed to demarcate the boundary between the two regional states, but its implementation has been stalled ever since with both sides accusing each other of non-compliance.

The Ethiopian government has further pointed to competition to control illegal Khat trade as another reason for the conflict.

Khat, a mild stimulant leaf grown across Ethiopia, is chewed by millions of Ethiopians, who use it to help them conduct work, undertake home studies or use it for recreational purposes.