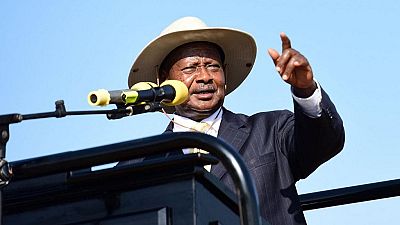 As the debate on presidential age limits in Uganda rages, president, Yoweri Museveni has lashed-out against some ruling party MPs opposed to the amendment of the Article 102 (b) of the constitution calling them “parasites”.

The 73-year-old president who would be an immediate beneficiary of the constitutional change, removing the 75-year age cap for presidential aspirants, is currently facing stiff opposition from a significant portion of the population.

Critics warn that if the article is scrapped, the floodgates to life presidency and all its associated ills would be flung open.

Meanwhile, Museveni’s convoy was on Wednesday morning stopped by striking taxi drivers at the Clock Tower in the capital, Kampala as they demonstrated against monthly taxes levied by Kampala Capital City Authority.

The drivers blocked the roads leading to the Clock Tower and vowed not to move away.

The claimed that Museveni suspended The KCCA frim collecting monthly taxes from them because they pay annual licenses for their vehicle.

President Museveni who was travelling from Nakasero State House to Entebbe State House was forced to stop and address them on the matter.

However, he did not make a pronouncement on the issue since he was late for other engagements before promising to meet them in future.

In September, the Ministry of Local Government issued a directive after the presidential order banning all the daily collections.

According to the directive, all the taxi and bus owners were only asked to pay statutory fees charged by either the Uganda Revenue Authority or the Transport Licensing Board.