Libya: Cameroonians protest against sale of migrants as slave 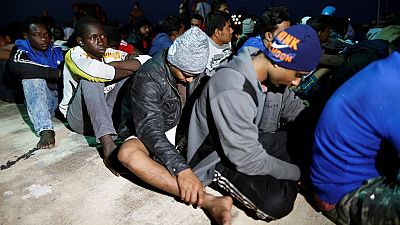 Some young Cameroonians on Monday demonstrated in front of the libyan Embassy in the capital, Yaounde denouncing the commercialisation of migrants in Libya.

Carrying various placards, the young demonstrators demanded that the Libyan government commit itself and put an end to the phenomenon.

They also denounced a meeting with the diplomatic representative of Libya, who wanted to talk to the protesters’ representatives.

Faced with the rising tensions, the law enforcement forces arrested three people, including Nzodjou Fotsing, the initiator of Monday’s movement.

Saddened by the death of a Senegalese who was sold as a slave, John Dahl Carter also known on social network as Carter took to social media decrying slavery in the North African country. His videos on the shocking story was picked up by CNN who later produced a documentary on the phenomenon.

CNN’s report has incited outrage in recent days, prompting a protest in central Paris, the video has received condemnation by the African Union and an official investigation underway.