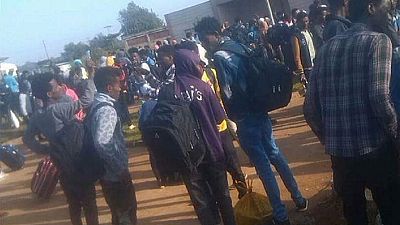 Ethnic tensions in Ethiopia is affecting university education as students from the northen Amhara region have abandoned their studies in the Oromia region.

Local media portal, Addis Gazetta, reports that the Amhara students were leaving Metu University campus ‘in droves.’ Their reason for leaving was for fear of their safety, the portal added. According to reports, classes had stalled since last week due to the tensions.

Pictures shared showed students on and outside the campus with their packed luggages. Reports indicate that they opted to leave despite assurances from the Oromia regional government to ensure their safety.

Ethiopia’s Federal Ministry of Education in early November made changes to placement of freshmen into universities located in the Oromia and Ethiopia-Somali regional states.

The move which effectively meant students from Oromia and Ethiopia-Somali regions could only be placed in universities located in their respective regions was part of measures to remedy a recent internal strife that led to deaths and mass displacements.

Protests had also been staged inside universities in Oromia demanding reassignment of students from Jijiga university due to ‘safety concerns,’ the Addis Standard news portal reported at the time.

The inter-regional clashes is said to be ethnic in nature even though political, human rights watchers and Oromo activists insist that it has an element of government complicity. The government says it continues efforts to restore a durable peace in the area.

Most ethnic Oromos believe that the government continues to arm a paramilitary force, the ‘Liyu Police’ located in the Somali region as part of efforts to clamp down on Oromo protesters.