France commemorates the second anniversary of the Paris attacks 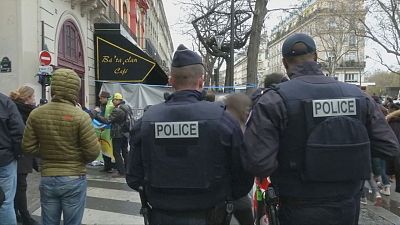 France will commemorate the second anniversary of the Paris attacks on Monday. (November 13)

In all, 130 people were killed when groups of gunmen and suicide bombers attacked the perimeter of the Stade de France sports stadium, the Bataclan music hall and a string of six bars and cafes: La Belle Equipe, Le Petit Cambodge, Le Carillon, A la Bonne Biere, Casa Nostra, and Le Comptoir Voltaire.

For the first time as president, Emmanuel Macron will lead commemorations at each of the sites targeted by the attackers.

On Monday (October 30) Mr Macron signed a controversial security and anti-terrorism law, that will take over the state of emergency that had been in place since the November 2015 attacks.

According to the interior ministry, extraordinary measures have helped intelligence agencies thwart more than 30 attacks in the last two years.

Last week, the police arrested nine people and another was apprehended in Switzerland in a coordinated counter-terrorism operation.

The measures mean that without approval from a judge, the interior ministry will be able to set up security zones when there is a threat, restricting the movement of people and vehicles in and out and will have the power to carry out searches inside the area.

Police will also have extended powers to search properties, conduct electronic eavesdropping and shut mosques or other locations suspected of preaching hatred.

French prosecutor Francois Molins has said that while larger cells are still plotting, more attacks are likely to come from isolated individuals using “low-cost” methods such as cars or knives to kill.