Anti-war plea from Pope as he prays for WW2 victims 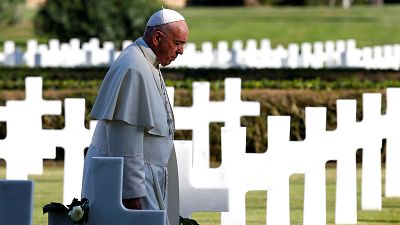 Pope Francis prayed for wartime victims on Thursday and warned that the world seemed to be headed into a conflict perhaps bigger than any before.

On Catholic All Souls Days commemorating the dead, he paid a solemn visit to the Ardeatine Caves in Rome.

There, in March 1944, occupying Nazis shot dead 335 Italian men and boys as a reprisal for the killing of 33 German soldiers by resistance fighters.

Dozens of the victims were Jews and Francis and Rome’s chief rabbi, Riccardo Di Segni, each read a prayer.

After walking past the tombs in the still dark caves, the pope wrote in the visitors’ book: “This is the fruit of war: hate, death, vendetta. Forgive us Lord”.

Pope Francis at Ardeatine Caves writes: "These are the fruits of war: hate,death,vendetta. Forgive us, Lord!" pic.twitter.com/IwL1mjweUt

Earlier he made an emotional anti-war plea at a US military cemetery in the town of Nettuno, south of the Italian capital.

Francis said a Mass for several thousand people at the Sicily-Rome American Cemetery which is the final resting place for 7,860 US soldiers who died in the liberation of southern Italy and Rome in 1943 and 1944.

He walked slowly and alone amid the rows of low white headstones in the shape of crosses and Stars of David, gently resting a white rose on about a dozen and stopping to pray silently before saying the Mass.

“Please Lord, stop. No more wars. No more of these useless massacres,” he said, speaking in hushed tones in an improvised homily.

Pope Prays for End to All War While Visiting American Cemetery in Italy https://t.co/v8AFFGFOjh pic.twitter.com/KmPtILMHvk

Francis said that remembering the many young people who died in World War Two was even more important “today that the world once more is at war and is preparing to go even more forcefully into war.”

He did not elaborate but appeared to be referring to the possibility of nuclear war.